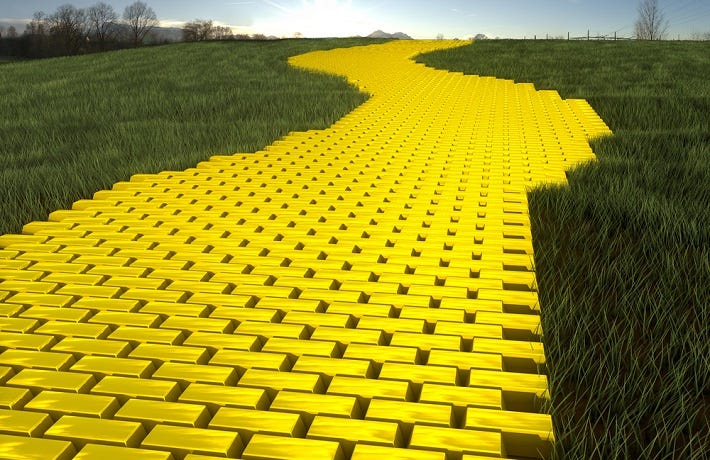 May 2019 marks two significant milestones for precious metal investors, and we should take a moment to recall each.

First, it was twenty years ago this month that British Prime Minister Gordon Brown began a program of dumping over 400 metric tonnes of U.K. gold. The process that was later dubbed "Brown's Bottom" as it concluded in 2002, with prices at multi-decade lows below $300/ounce. See this link from the BBC: https://www.bbc.com/news/business-48177767

In 2012, Thomas Pascoe of The Telegraph researched this debacle and found that the public reasons given for Brown's decision were misleading, to say the least. Pascoe's original post seems to now have been thoroughly scrubbed from The Telegraph's website, but records of it remain through these links:

If you can learn anything from this unfortunate bit of British history, it's this: Western governments will stop at nothing to support and enable The Bullion Banks as they endeavor to maintain control of price through the current "LBMA/COMEX Gold Pool". Brown's decision to liquidate over half of his country's gold reserves at the price lows twenty years ago simply underscores this unfortunate fact.

This month also brings the eighth anniversary of the May Day Massacre. This event, which occurred on May 1, 2011, saw the price of COMEX silver fall over $6 in a matter of minutes during the usually-quiet Sunday evening (U.S.) Globex trade. It looked like this on a chart printed that evening:

And now, given some recent public disclosure by former CFTC commissioner Bart Chilton, it's quite simple to connect the dots and lay responsibility for this event at the feet of JP Morgan.

If you haven't yet, be sure to listen to this interview that Chilton gave to Chris Marcus of Arcadia Economics back in March of this year. As fate would have it, Chilton passed away from pancreatic cancer about a month later, so this served as one of his final public appearances: https://arcadiaeconomics.com/silver-manipulation/i...

In the interview, Chilton confirmed several basic premises under which we've been working for years, namely:

• That JP Morgan had, in fact, inherited a massive COMEX silver short position from Bear Stearns in 2009.

• The CFTC expected JPM to immediately begin the process of eliminating this position.

• Instead, seeking a profit, JPM actually expanded the position to dangerous levels.

From there, the rest is history. Beginning in August of 2010, the price of COMEX silver began an epic run based upon physical demand and paper short-squeezing. Price rallied from $18 to $48 with the final $10 in April of 2011 coming almost exclusively from a "Commercial" short squeeze, as the CFTC-generated Commitment of Traders reports revealed at the time.

Just as price was ready to escape from Banker control, The May Day Massacre occurred. This set off a wave of speculator long liquidations that was exacerbated by five margin hikes in nine days issued by the CME Group. Price crashed to $26 in days and has since never recovered.

Having been caught naked short COMEX silver, JP Morgan was allowed to rush into existence their own COMEX silver vault. Having no vault and no physical silver had left the bank vulnerable to the 2011 short squeeze, and they—along with the CME—were in no hurry to see this happen again. The result? Over the past eight years, JP Morgan has amassed a horde of physical silver in excess of 150,000,000 ounces. They now have complete domination of COMEX silver by virtue of controlling nearly 50% of the total vault supply. See below:

And, as you can see below in this informative chart from Nick Laird, though the total amount of silver vaulted for COMEX has nearly doubled over the past seven years, this is largely due to the emergence of this JPM vault. All of the other depositories have seen their vault stock essentially remain constant.

How do we know that much of this vaulted silver is actually the property of JP Morgan? All we had to do was follow the monthly delivery reports during the time period when the silver was being accumulated. The deliveries were all made to the proprietary account of the bank and now reside in the eligible category. We wrote an extensive article on this back in 2018, and you should take time to review this post now: https://www.sprottmoney.com/Blog/jpmorgans-dominat...

So, in summary, based upon the "testimony" of a dying Bart Chilton, we can now deduce:

So, what's the point of all this, and why take time to type a post that recalls these events of twenty and eight years ago this month? Simply: just to remind you that in 2019 The Bullion Banks and their enablers at the CME Group, the CFTC, and in London continue to seek to dominate and control price. However, as with The London Gold Pool of the 1960s (https://en.wikipedia.org/wiki/London_Gold_Pool), this modern day LBMA/COMEX gold and silver pool will also reach a point of self-destruction.

James D
Reply
All documented, all true, most all quoted from a CFTC Commissioner himself. How this can see the light of day and the CME/COMEX not come under immediate investigation or review by the Senate Banking Committee and the House Financial Services Committee? Maybe the bank lawyers are paid a bit more in the millions while the regulator' lawyers are still trying to pay their mortgage, while the Congressmen receive their campaign contributions from the culprits in question. Trust through transparency right?
Reply

Chuck
Reply
Thank you very much, Craig, for your excellent and helpful analysis each week! I greatly appreciate the insights you provide, and look forward to your commentary each week. It's a great contribution to everyone's understanding of the gold and silver markets. All the best to you, Chuck
Reply

Michael
Reply
If JPM truly holds all of that "physical" silver at the Comex then why the need for the Exchange for Physical scam?
Reply
View more

victor
Reply
Craig your comment: "only physical metal will protect you when the day of Bullion Bank capitulation finally arrives". I am a holder of shares in silver mining companies, what are the main risks that you see to my portfolio?
Reply
Leave a Comment