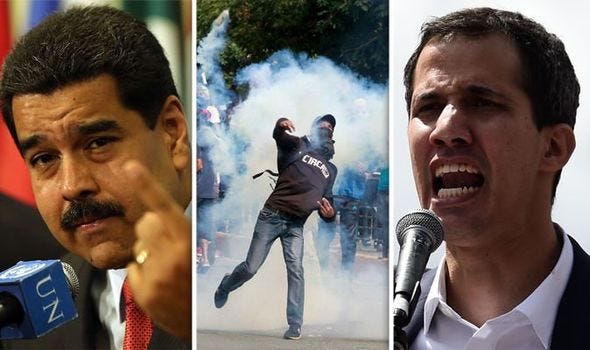 There is no way around this, and to dream and hope for a Utopian scenario, although noble, is a fallacy. As we have seen throughout history, time and again, it leads to nothing but chaos, anarchy and destruction.

Over the past few years, I have followed the deterioration of Venezuela under the leadership of President Nicolas Maduro, predicting that it would eventually end disastrously.

Sadly, this is nothing to rejoice about, as millions of people have suffered untold hardships. Hunger has wracked the nation of Venezuela, with those capable of doing so fleeing the country before it was too late.

Unfortunately, as is typical in these scenarios, many have not had the means to escape the suffering, and now find themselves utterly trapped as this dreadful crisis progresses.

This has led to social and political angst, with Maduro's "peaceful" socialist government responding in kind, knuckling down on its people in a brutal and gruesome fashion.

I believe this may all be coming to a boiling point and will soon reach a catastrophic crescendo, where one side or the other makes a move that will leave the country scrambling to recover.

Juan Guaidó, the 35-year-old National Assembly leader, has recently sensed Maduro's weakness and has thus made a powerful and bold move—one which may cost him his life if he is not victorious.

Declaring himself the "interim" President of Venezuela, Guaidó has accused the sitting government of committing heinous crimes against the state and breaking the people's constitutional rights, crimes for which Maduro must be removed from office.

Maduro has rejected this demand outright and has once again cracked down on those who would attempt to strip him of power. Of course this would be his reaction, as to give up the presidency now would mean his destruction.

In his mind, Maduro has no other option: he must do what he needs to do in order to survive the increasingly hostile situation developing by the minute.

However, he may not be able to contain this new uprising, as powerful forces are backing Juan Guaidó, both within the country and from the international stage.

With the United States leading the way, the following countries have announced that they support Juan Guaidó and recognize him as the lawful President of Venezuela:

Still, this struggle is far from over, and Juan Guaidó will have to convince a large portion of those who stand on the sidelines to rise up and join him.

Foremost, if he hopes to break Maduro's grasp over the people of Venezuela, he needs to convince the military to back him—something he has yet been unable to do.

This is a story that will continue to develop at breakneck speed until something snaps.

Hopefully in the end, the people and the country of Venezuela will come out stronger and better, allowing them to move down the path towards growth, healing and recovery, all of which they desperately need.