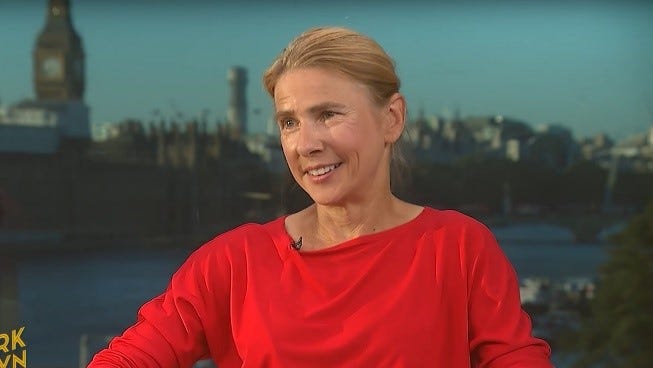 The gold community is filled with historians, accountants, and assorted dweebs, almost all men whose consistent warnings about government borrowing have fallen on deaf ears.

However, it’s a complicated subject. By now, Americans are so strapped that few even consider questioning the country’s debt growth economic model , which most experts know (but can’t admit) is a Ponzi scheme.

Into this mess wades Lionel Shriver, a woman and a fiction writer to boot, who in The Mandibles illustrates what could happen to a typical American family when the country’s creditors finally pull the plug.

The book chronicles the journey of the Mandible family following the collapse of the U.S. currency in 2029, renunciation (by “President Alvarado”) of the national debt, and hyperinflation.

Touching the soul in a way that graphs can’t

Shriver’s “worm’s eye view” of how a coming collapse could affect ordinary folk is in many ways more poignant than technical charts used by gold bugs, non-fiction writers like Jim Rickards, and the Alt-financial media.

For example, Shriver describes how a tenured Georgetown economics professor loses his job after the university’s endowment and government funding collapse, his boys get yanked from private schools, and his daughter Savannah heads into prostitution, a now-laudable career choice.

A final insult: in The Mandibles, Mexico sets up a wall to prevent impoverished American economic refugees from fleeing to a better life.

Although The Mandibles is at times a funny work of satire, it is also profoundly unsettling, because Shriver, a fiction writer, touches the soul in a way that economists can’t.

Indeed, not since Francisco d’Anconia’s speech about gold in Ayn Rand’s Atlas Shrugged a half century ago has a fiction writer so fully grasped the key importance of sound money: man either trades with each other, or we enslave and steal from each other.

A long time ago, Calvin Coolidge supposedly said that “The business of America is business.”

Wealth redistribution, according to Truth in Accounting , now equates to more than 60% of GDP.

That means there is more money to be made by convincing governments to tax other people and transfer the wealth to you than from any other economic activity.

Shriver, like an increasing number of experts, is categoric about who the winners are in this system.

“Ever think about what the federal government does?” asks Jared Mandible, the family’s nutcase prepper and savior. “It takes your money and gives it to somebody old. That’s about it.”

We have to talk about The Mandibles

Shriver, however, remains optimistic. She surprises in key, unsettling occasions.

In one, the 95-year old Mandible family patriarch, “The Great Grand Man,” shoots his demented wife and then himself in order not to slow the younger Mandibles as they flee a dangerous New York City, on foot, to Jared’s farm upstate.

The example—almost unheard of in America, where boomers have bankrupted the country for two generations—demonstrates a quaint portrayal of sacrifice, which once prevailed but is now largely gone.

Another Mandible senior also contributes in the clutch.

Ninety-year old Enola Mandible reveals that a heavy box of her old papers, which she has been clutching protectively throughout the multi-decade tale, also contains gold bars she hid from the U.S. government when it announced a 1930s-style national confiscation of the yellow metal.

Proceeds from that “crime” enable the family to bounce back.

Shriver, who has written fifteen books including The Mandibles, would laugh away “The Gold Girl of Fiction” title.

Critics, too, would almost certainly laud Shriver’s previous books, such as Big Brother (which recounts the story of an obese man) and We Have to Talk about Kevin (which deals with a mother’s ordeal after her son shoots up a local school), as more serious works.

Whether they are correct is moot.

The Mandibles is required reading for anyone interested in economics…or gold.