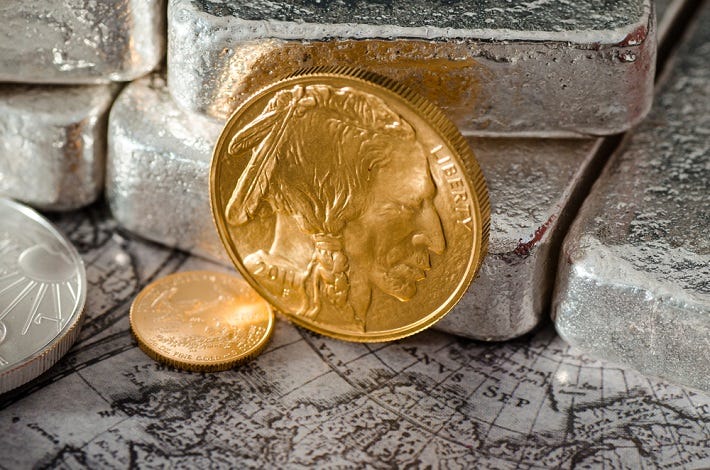 We have been watching paint dry in the metals complex for months now. Both Gold and Silver have been drifting lower in a bullish flag pattern, but we’re still waiting for a definitive break one way or the other. With this in mind, this week I’ll take a look at what is happening in stocks and bonds for any insights that they can provide in terms of the next direction for the metals and miners.

The S&P 500 index and the 10-Year Treasury Bond Yield have a correlation coefficient of 0.73, which means that as stocks go up, yields tend to rise also, and vice-versa for a drop in stocks. The S&P has enjoyed a tremendous rally since last December, despite some awful earnings and guidance and an economy in recession. This is because of the Fed’s complete 180 from rate hikes and QT to rate cuts and QE. Liquidity is all that matters for stocks. Hence the rally to new highs despite the traditional headwinds.

However, the risk for stocks is now growing. Fed QE in the form of liquidity injections into the repo market is already baked into stock market valuations. So, too, is the “phase one” trade deal with China, a deal in name only, imho. Unless the Fed is going to revert to full-blown QE in the coming months, there are few catalysts for higher equity prices. On the contrary, should the Fed pause for any reason, watch this train come off its tracks instantly. Efficacy of monetary policy is another concern given that it’s clear that it does little or nothing for the underlying economy and only inflates asset prices. To the extent that confidence in such policy ebbs at all or economic recession becomes crystal clear, equities could suffer. As for the trade war with China, that could escalate again at any time. Nothing material has changed.

More immediate is the fact that the S&P is now at a new all-time high, but it’s a negatively divergent one per the RSI and both MACDs. Now, it has ignored these divergences in the past, but that is less likely when all three are divergent at the same time. Sentiment is extremely bullish and divergent also and looks ready to turn south. This is most evident in VIX positioning with Large Funds near record short, typically a sign that at least a short-term top is close.

Should the S&P fall, expect cash flows to move into the bond market, driving down yields. Given that inflation has been relatively stagnant, this would mean real yields would fall too. As I’ve shown often and many of you already know, when real yields fall, metals and miners typically rally.

The weekly chart paints a clearer picture. You can see the Head & Shoulders formation currently on the chart. Should this play out, I’m looking for a positively divergent lower low in yield.

This would also signal higher highs in Gold, Silver, and the miners. We can consider what to do next once we get there.

Simply put, the risk is growing that stocks suffer a setback soon that acts as a catalyst for new lows in bond yields and higher highs across the metals and miners complex. The levels I am watching in Gold are 1446 and ~1420 on the downside, with the prior high at 1492 being key resistance to break. In Silver, 16.50 and 16.20 are key support levels and 17.41 the prior high we need to get above to signal a change in trend to the upside and new highs ahead.