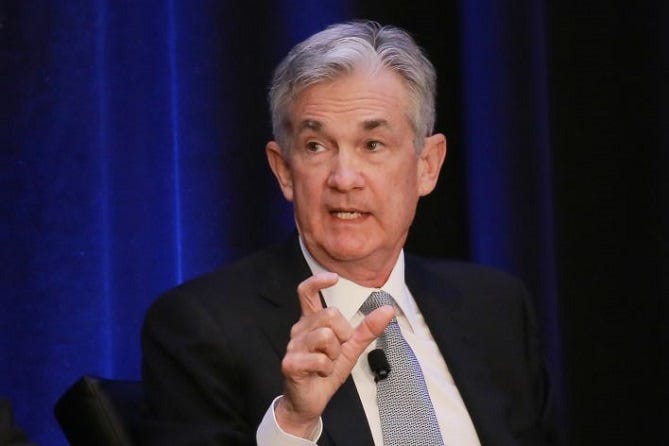 Did I hear correctly, or have I truly gone mad? Did Jerome Powell, the head of the Federal Reserve, actually lecture Congress over their ballooning debt levels and out-of-control spending?

After reconfirming: no, my sanity is still intact. And yes, the Federal Reserve—which knows nothing other than printing fiat “funny money” into oblivion—is actually lecturing Congress about the path the United States is heading down, one which now sees the National Debt level at a stunning $24 Trillion and growing with each passing second.

The irony is just too sweet, as the Federal Reserve are the kings of debt and the facilitators of this out-of-control situation. Look at their recent actions in the overnight lending repo markets, where they vigorously plugged holes, threw ungodly amounts of money at the problem, and ballooned their own balance sheets in the process.

Regardless of the "pot calling the kettle black", the Federal Reserve is not incorrect in their assessment. Government deficits have indeed been exploding higher lately, accelerating at an alarming pace.

In fact, the latest Treasury Department Report, released on October 31st, highlights just how much the deficit has been growing, with last month's shortfall being 34% higher than the same time period in 2018, hitting $134.5 billion in just one month!

Projections for the 2020 deficit don't get any better, with estimates indicating it will surpass the $1 Trillion mark, a number that was only reached previously in the years following the 2008 crisis.

This is happening in the "good" times, and this is exactly why Federal Reserve Chairman Powell is ringing the alarm bells over Congress' head, as he knows that the Fed will not be able to bail out the markets like they did during the 2008 crisis.

Perhaps, as the Fed's own words indicate, they know that they are out of bullets this time around, with interest rates at already historically low levels.

Below are just a few of the alarming statements that Federal Reserve Chairman Powell made to Congress during Wednesday’s meeting:

“The federal budget is on an unsustainable path, with high and rising debt. … Over time, this outlook could restrain fiscal policy makers’ willingness or ability to support economic activity during a downturn.”

In addition to this "talk down", the Fed Chairman also reiterated his previous position that the Fed has no intention of lowering interest rates anytime soon, unless the economy takes a nosedivein the coming months.

The broader markets appear to believe in the Fed’s recent hawkish stance. As it stands today, the markets believe there is a 96.3% chance that rates will not be changed at the next month’s Fed meeting.

I would say that these odds are absolutely correct. The damage to the Fed’s reputation would be severe indeed if they continued to lower rates after all this hawkish talk, especially after they just wagged their fingers at Congress for their reckless spending.

Still, 2020 is an entirely different ball game, and I expect continued intervention in the markets on behalf of the Federal Reserve, continued excessive spending and record deficits from Congress, and extreme volatility as we head into the 2020 elections. I believe the latter will be incredibly violent and nasty, leading to even further division within the United States.

All of this is a recipe for higher gold and silver prices, which have been suffering under renewed attacks and are thus trading at a discount to what I believe will be much higher future prices.

Until then, keep stacking and ignore the noise.