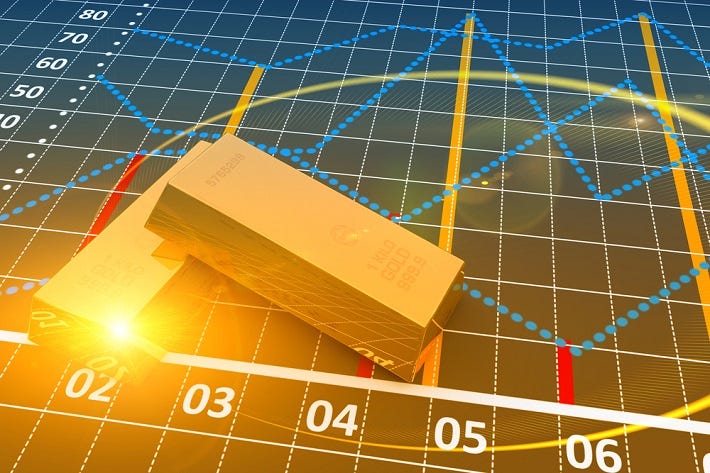 The recent 20% dump in stocks triggered growing expectations of a Fed reversal in monetary policy back to interest rate cuts and QE. To the extent that the nascent rally in stocks since the start of the year continues, those expectations are likely to recede and put pressure on Gold.

The Fed is “talking” dovish, but its purpose is hawkish: to push stocks higher in order to enable further rate hikes. Higher stocks and the increasing risk of higher interest rates are likely to weigh on Gold in the near future.

Ultimately, the Fed will be forced to reverse policy to avoid a collapse in stocks, which will contribute to dollar weakness, triggering a massive rally in Gold.

U.S.-China trade talks are unlikely to be resolved voluntarily, because President “Xi will NEVER allow the U.S. to dictate China’s domestic policies.” The pattern right now is that optimism grows ahead of trade talks, USD/CNY falls and Gold rises, only for disappointment to follow because nothing substantive has been agreed upon, and USD/CNY rises, Gold falls. A lot of optimism has already been priced into USD/CNY that is likely to be reversed soon.

Gold has rallied ~$130 off its August 16 low and could go higher, but the risk/reward increasingly favors at least a short-term pullback.

That said, the trend is clearly up. Only a break of the recent low at 1278 followed by a lower high would change that.

The spot DSI, currently at 59, means the risks are relatively balanced here. However, the trend is clearly higher, demonstrated by the 21-day moving average.

Given the partial Government shutdown, we have not had any updated reports since December 18. However, given that the price is ~$40 higher since then and Funds were racing to get long at the time, it is reasonable to assume that they have continued to add to those longs. The question is, how long are they and how fast have they been adding to their position? We won’t know until we get new data.

It was notable that the Commercials, and specifically the Banks, were racing to get short back on December 18 and have likely increased those shorts also.

Although Gold has risen against all major currencies recently, Gold in dollar terms (XAU/USD) and in yuan terms (XAU/CNY) have been fused at the hip since both of them bottomed on the same day, August 16. This makes sense, given that USD/CNY has been in a tight range between 6.78 to 6.98 since then.

Like XAU/USD, XAU/CNY has soared since August, but it became extreme overbought on January 3 with an RSI of 78. As expected, it has fallen back since. The risk now is negatively divergent higher high to ~9000, signaling a potentially sizeable pullback. This matches the scenario laid out on the daily Gold chart above.

Switching to USD/CNY: As I mentioned earlier, it has remained in a relatively fixed range of 6.78-6.98 since August, but it has fallen to the bottom of that range recently and is extreme oversold with an RSI of 31. It has also hit a positively divergent lower low relative to its low on December 4, when the RSI fell to 30. It could continue to fall, but the risk is that USD/CNY rises while XAU/CNY falls, a toxic combination for XAU/USD, and would certainly contribute to a pullback in Gold.

What could be a catalyst for a rise in USD/CNY? Disappointment (again) with the news from the trade talks?

The overall trend in Gold is clearly higher. However, it is running into strong resistance after a long rally and is extreme overbought on multiple indicators. There is the risk of a negatively divergent higher high and pullback to follow. This can be clearly seen in XAU/CNY terms also. The fundamental backdrop also supports a pullback in Gold, to the extent that stocks continue to rise and expectations for further rate hikes increase and those for a Fed policy reversal recede. Another disappointing outcome from the U.S.-China trade talks could also cause a pop in USD/CNY.

The only caveat to this conclusion would be a precipitous drop in the dollar against all currencies, which would obviously benefit Gold also.

On balance, based on the data available to us, the risk/reward clearly favors a pullback following a negatively divergent higher high. The question is, how low do we go? What is more certain is that this will be the final opportunity to get long Gold (and Silver), given the rally that is to follow once stocks peak and complete the third and final leg of their crash. Gold is not only the new “TINA” (there is no alternative), but if we do get a reversal in Gold, there is no better place to “BTFD”.

Footnote: If anyone has any questions about where to buy physical precious metals, or about Gold or Silver bullion storage, you can reach me on Twitter, @globalprotrader, or on my free website, globalprotraders.com. Happy to help.