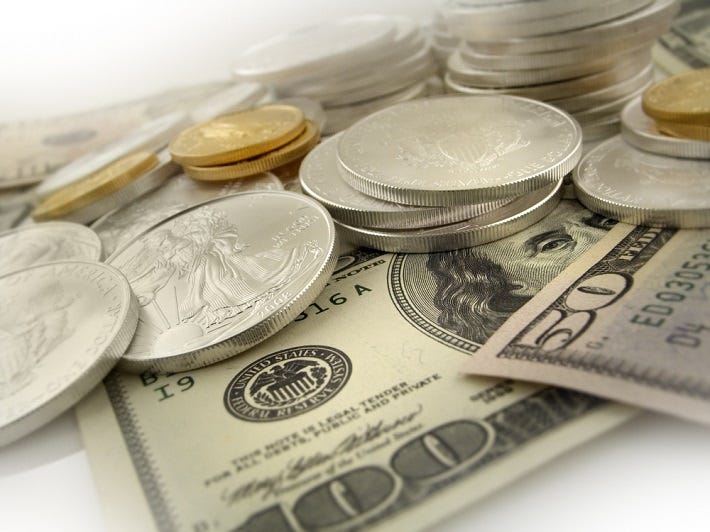 In an interview last week, I was asked if I had any regrets about owning and holding physical gold over the past six years. As you might imagine, my answer was a resounding "NO".

Now don't get me wrong. It has been a very difficult six years. Gold was smashed below $1525 in April of 2013 and then traded in what was mainly a $200 price range until a month ago. With price in dollar terms now breaking out of that range, I suppose the opportunity cost question was a timely one.

And what is "opportunity cost"? This from Investopedia:

So, the question in question was basically: "Do you feel foolish having held gold since 2013 when you could have owned Amazon"?

This requires a two-part answer, so let's hit them both.

First, there's the implication that I could have "made more money" if I had owned Amazon versus gold. That's the opportunity cost part of the question. But the answer isn't direct and easy, because it requires you to revisit the decision of why you bought physical gold in the first place. Did you buy it because you expected to "make money" and post an easy profit? Instead, did you purchase gold as an insurance policy against the madness of the central bankers and their failing, debt-based monetary system?

Additionally, are you only looking at the gold price in U.S. dollar terms? Because if you are, you're failing to note that other gold investors around the world are currently enjoying the protective benefits that physical gold ownership brings. Note the charts below that show all-time highs for gold priced in British pounds, Canadian dollars, Australian dollars, and Indian rupee.

But it's the second part of the answer that I find more frustrating. Why must any gold investor be made to feel that it is only their physical gold investment that comes with an opportunity cost? If we're going to be fair about it, then why didn't I also sell my house in 2013 and use the proceeds to buy Amazon? With the benefit of full 20/20 hindsight, owning a house has been foolish too.

But wait a second, you might say. Your house is valuable, independent of your other assets and investments. It provides shelter. It shields you from the uncontrollable heat of summer, and it provides a safe haven during the storms of winter. Yes, the stock market has gone up faster than the housing market, but that doesn't mean you haven't received tremendous value and peace of mind from investment in your home.

And that's the point here. At any time over the past six years, a devastating economic storm could have laid waste to the stock market and the accounts of all those who are fully invested there. The fact that the storm did not materialize between 2013-2019 does not make the shelter provided by my physical gold ownership any less valuable over that time period.

And now here we are in the summer of 2019. As noted above, the price of gold in nearly every global currency is breaking out to new all-time highs. It will soon break out to new all-time highs in dollar terms too. So, if you have successfully navigated your way through the past six years, do you now find yourself with investment accounts that are full of cash? If so, wouldn't some investment in physical gold seem to be a prudent diversification at this point?

You may have avoided any regret from opportunity cost these past six years, but you may not be able to avoid it over the next six. Therefore, seek now the shelter of physical precious metal. And acquisition of physical gold and silver is easy... you can even hold it in your IRA! You can store it at a trusted gold bullion storage company or in your own, personal safe. You can hold it in gold bullion coins or silver bullion bars. Take your pick. Just be sure that you invest and prepare before the next economic storm comes ashore.