Does Palladium Signal the End of Paper Futures in Gold and Silver? - David Brady (Jan 23, 2020) 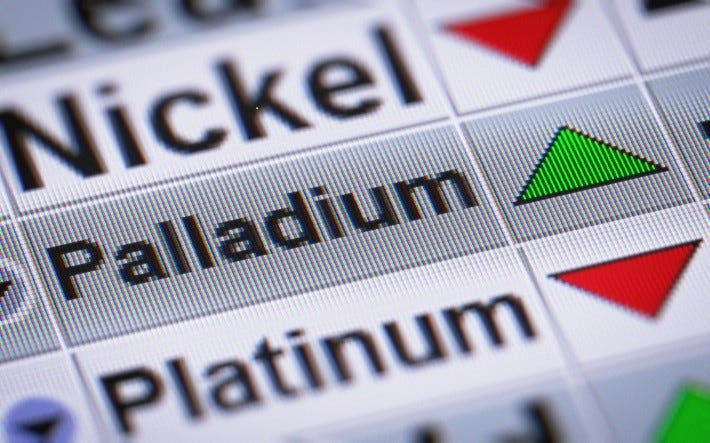 I am not here to go into the fundamental reasons why the futures market for Palladium has broken down. I recommend you review the work of David Jensen ( @RealDavidJensen) and Craig Hemke (@TFMetals) in that regard. They saw the breakdown months in advance. Instead, I analyzed the COT data for signs that the Palladium futures market was about to break down and when it was clear that it had. I did this with a view to finding what to look for in Gold and Silver that would signal the suppression of price in those markets was also approaching an end (or already has ended).

Below is the most recent COT report for Commercials’ positioning in Palladium.

Commercials did rapidly increase their net short position from the low of near zero in August, 2018, but literally surrendered in December. It looks like they gave up making a market in the metal altogether because the Funds were unable to chase the price higher by increasing their net long position, as they have always done when price rises materially. Simply put, they couldn’t buy any more paper futures contracts.

If we needed any further confirmation that the futures market was broken, we need only look at open interest, which also peaked and slowly fell despite the rapid rise in price. Compare that to the same period from March 2016 to January 2018.

After a rally from January 2016 to January 2018 of over 150%, or $682, Palladium fell just 28%, or $318. Then it took off again, and as we know now, after a vain attempt to cap the price they decided to give up this time and not risk being even more record short this time around. They realized that paper futures no longer had the same effect on the price of the underlying commodity anymore and did not want to risk being caught massively short as the price continued to soar higher.

Now going back to Gold and Silver, could we see the same pattern play out in those metals?

Commercials hit a record high short position three weeks ago. They could hit a new record high yet, but based on what happened to Palladium, this would suggest that we still have a massive dump to come in positioning, with a more moderate decline in price before any risk of a complete breakdown in the futures market.

At the same time, Funds have yet to eclipse their prior record net long position in 2016, which suggests further gains to come before any meaningful correction.

Whereas Funds’ net long position may not have peaked yet, open interest just hit a new record high last week, almost 25% above the prior high in 2016. If a similar scenario plays out to that in Palladium, open interest will peak and dump soon, taking price down with it to a lesser extent.

Based on the same data for Silver, it is nowhere near a major peak yet. Commercials’ net short position is still well below its 2017 record level.

Like Gold, but even more so, Funds are well below their record net long position in 2017, which suggests further upside ahead.

Unlike open interest for Gold, Silver’s is still shy of record levels but not far away. This is another indication that Silver will outperform Gold going forward, in my opinion, and may have further upside to go yet.

In summary, there is little to suggest that the futures markets for Gold and Silver are on the verge of breaking down, at least not based on positioning. But if Palladium is any guide for Gold and Silver, it does suggest that time is running out for the paper merchants and we have one more major dip before that occurs. At least we know what to look for from a positioning perspective if history repeats itself.

In the short term, I am still looking lower in Gold and Silver to ~1500 and ~17 respectively. That said, the risk-reward is clearly skewed to the upside absent a crash in stocks and spike in nominal and real bond yields. This is still a buy-the-dip market until further notice.