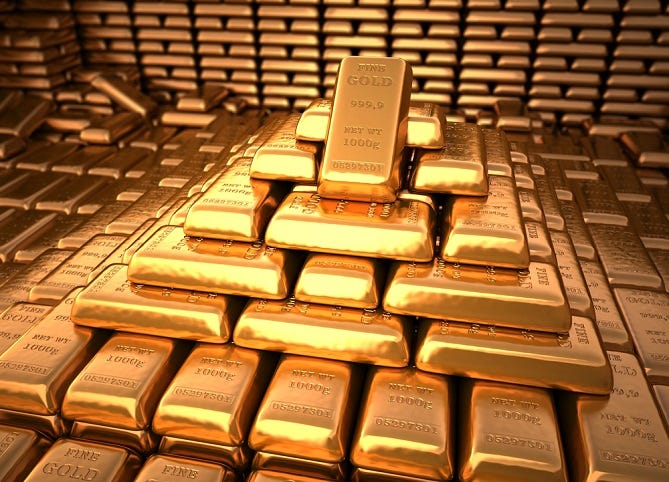 Over the past decade, gold has continually streamed out of U.K. vaults and headed over to Switzerland, where it is recast into kilobars and shipped to Asia. Suddenly, that trend has reversed, and this leads to some interesting implications.

First of all, we've been hearing about "empty LBMA gold vaults" for years. Here is Ken Hoffman of Bloomberg in late 2013:

And at that point, gold began flowing back into the United Kingdom. For 2016, the U.K. officially posted a net gain of 1,023 metric tonnes. In the time since, U.K. import/export numbers have ebbed and flowed, primarily in line with the fluctuation of the GLD "inventory" and other physical demand indicators.

On the chart shown below (courtesy of the great Nick Laird at GoldChartsRUs), you can see the cumulative totals since Ken Hoffman declared the London vaults empty in late 2013.

Thus, it would appear that the vast majority of the gold that has been imported on a NET basis into the U.K. since 2013 has been central bank or sovereign gold held there in "safekeeping". The vaults are no longer "empty", but it's not like what's there should be readily accessible as LBMA settlement flow for ETF and other demand.

So now here's where it gets interesting...

Since June 30, the GLD "inventory" is up more than 84 metric tonnes from 794.04 mts to 878.31 mts. In light of this, check the sudden turnaround of gold flows into and out of Switzerland, where 70% of the world's gold refining takes place.

On the surface, it certainly appears that the U.K. has halted its gold exports to Switzerland and has begun massive gold imports due to the sudden and surging demand for gold into the "inventories" of the major gold ETFs.

And check how this has impacted the flows into and out of other countries! Typically, the U.K. exports gold to Switzerland and then the Swiss export it back out to points east. In July, however, this trend completely reversed, with gold flowing INTO Switzerland from the east and then back out into the United Kingdom!

So the question is ... How much longer is this sustainable? If the U.K. ETFs continue to demand 50+ metric tonnes per month in inflows, can Thailand, the UAE and Italy be counted upon to continually supply it through Switzerland? Probably not. And note that other countries, to which Switzerland has been a net exporter for years, have suddenly been cut off. Hong Kong, China, India and Turkey combined only got 20 metric tonnes last month! In a region where demand is insatiable, from where will these countries get gold if the Swiss are busy sending all of their exports to London in the months ahead?

As a reference for the contrast of all this versus recent history, here are the same Swiss import/export charts for July of last year:

So what does all this mean? In short, The Bullion Banks have been running a fractional reserve pricing scheme for gold for decades. This has allowed them to manage demand for physical gold through the creation of all sorts of gold "equivalents". Like all frauds, this scheme has been doomed to failure from the start and many of us have eagerly awaited the reckoning for years. Could this delivery failure and physical supply squeeze finally be on the horizon? Time will tell.

In the meantime, just be sure the gold you own is just that ... real gold ... gold that you hold yourself or at a trusted storage company. Do not trust The Bullion Banks or their ETFs. Any "gold" held there is not yours. It is simply an obligation on a Bank's books, and you are their counterparty.

Don't be their counterparty. Buy gold. Take delivery and store it in a safe place. Do it now. While you can.