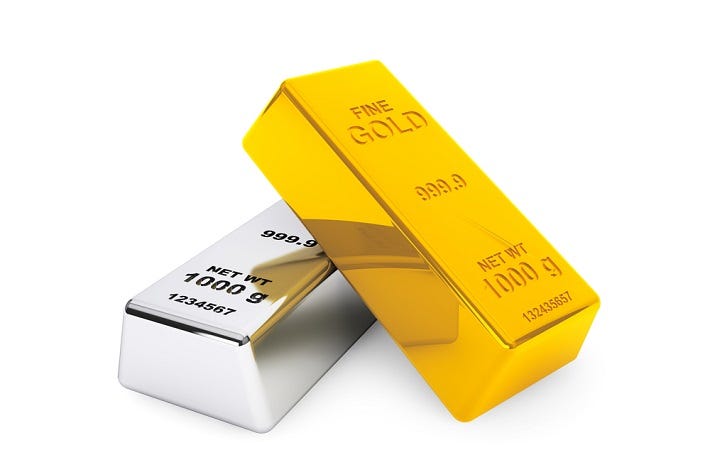 We have published many articles, arguing that bitcoin is unsound. Yet for all those arguments, there is a bright side to bitcoin. It is exciting to see that there is an audience of millions of people—mainstream people, not wild-eyed End-The-Fed gold bug preppers who keep their gold hoards with their stockpiles of ammo—who are looking for an alternative to the Fed’s failing fiat currency. Or if not looking actively, at least receptive to it.

We believe that the most important force contributing to dollar inertia is not law (and it’s certainly not the US military). It’s in your head. And in the heads of everyone else. To see what I mean, do a Google Images search for “money”. You will see pages and pages of green printed paper. And you won’t see pictures of gold coins (for that, do a search for “bitcoin”!)

Even most of the gold owners who have an implacable hatred of the Fed, think of the value of their gold as measured in dollars. Indeed, the number one complaint in the gold bug community is that the banks are pushing gold down. Down? Yeah, reducing its price as measured in dollars. Less dollars exchanged per ounce means gold is less valuable—what else could it possibly indicate?

Money means the dollar, and the dollar means money. This is how people think, at the moment. It’s a perfect example of a phenomenon described by Johann Wolfgang von Goethe.

“None are more hopelessly enslaved than those who falsely believe they are free.”

Sure, it’s good to get out of being a creditor to the Fed by owning gold or even bitcoin. But if you accept the Fed’s core principle—that its counterfeit paper is money—you are still trapped in their system. Your chains are self-made, and self-imposed.

That said, we find it encouraging that so many people see at least some serious flaws in the Fed’s irredeemable currency, and its central planning. Social change is a non-linear process. It is expressed in an old (perhaps as old as a union speech in 1914) quote about social movements that is

We don’t refer to the bitcoin movement (and we are aware some will regard this point as irony, coming from us after we have written so much criticism of bitcoin). We refer to the movement away from central banking. The meteoric rise of bitcoin popularity proves we are past phase I. No Fed apologist can ignore the sheer number of people, nor the fact that they are clamoring for an alternative.

The realization that the dollar has fatal flaws is, of course, a one-way journey. Once someone sees this, he cannot unsee it. People do not go backwards. So there is a kind of ratchet effect at play here.

There may be many other attempts to develop alternative monetary systems, as people design new currencies without some of the flaws of bitcoin. This is healthy and all to the good. We may decry the billions of dollars of capital consumption fueled by the bitcoin boom, but we have to acknowledge the good of market discovery seeking a monetary solution that serves the people.

And we may (will!) continue to say that no irredeemable currency can work, whether central bank imposed or whether attempted in the markets. We may (will) keep saying that the gold standard—which is when anyone who wants to can earn interest on their gold, in gold —does work.

But a part of us is cheering bitcoin and all the other market experiments.

This week, the prices of the metals rose, $7 and $0.34 respectively. As the price of silver rose by a larger percentage, the gold-silver ratio fell. Which last week, we said we were betting on in our fund.

Let’s look at the only true picture of the supply and demand fundamentals of both gold and silver. But first, here are the charts of the prices of gold and silver, and the gold-silver ratio.

Next, this is a graph of the gold price measured in silver, otherwise known as the gold to silver ratio. The ratio dropped.

For each metal, we will look at a graph of the basis and cobasis overlaid with the price of the dollar in terms of the respective metal. It will make it easier to provide brief commentary. The dollar will be represented in green, the basis in blue and cobasis in red.

Here is the gold graph showing gold basis and cobasis with the price of the dollar in gold terms. We have again zoomed in to see recent developments in the basis.

Our Monetary Metals Gold Fundamental Price fell $39 this week, to $1274.

We see the same thing, silver is simply less scarce at the higher price.