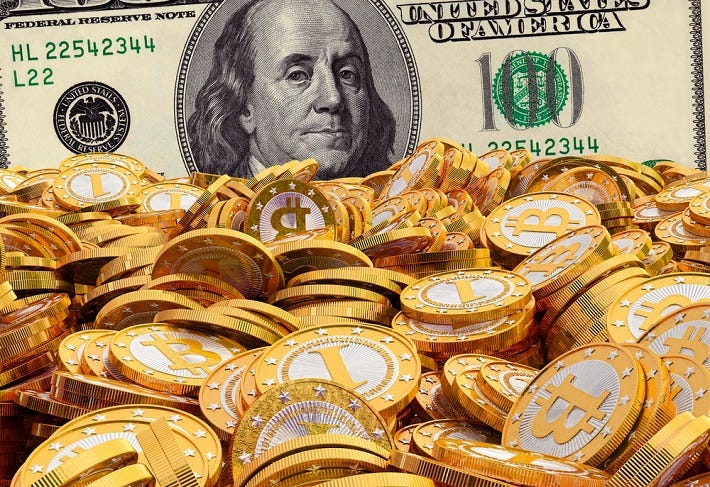 Bitcoin caught everyone by surprise last weekend, firing on all cylinders and quickly rocketing through its key psychological $10,000 USD barrier level.

As market participants woke up on Monday morning, the FOMO (fear of missing out) could be felt in the air. Stories of the last historic Bitcoin mania began to be retold, prompting visions of the profits that could have been, if only investors had acted sooner.

Forget the fact that there are still people attempting to recover from the very predictable, but none-the-less devastating crash that followed—this time was going to be different!

Throughout the week, the hype compounded in a stunning way, as the algorithms joined in on the action and propelled Bitcoin to above the $13,000 USD mark.

This was the first time that Bitcoin had reached these heights since January 2018, and many market experts simply couldn't explain what was going on. Why was this happening? What had changed?

As many of you know, I am a strong supporter of Bitcoin, despite my short-term negativity over these recent erratic price movements, as nothing should move this high, this fast, without some strong short-term dramatic change that dictates a resetting in price.

Of course, this move higher was soon set to change, as reality came crashing down and traders began to take out some quick profits, sending the price of Bitcoin crashing below $11,000 USD in just ONE trading session!

At the time of writing, Bitcoin stands at $10,831 USD, which is a 19.22% loss within less than a day. A complete bloodbath, and a loss that is going to leave many traders who hopped on the hype wagon deep in the red.

Once again, Bitcoin and cryptocurrencies in general are reminding everyone just how volatile and unpredictable they can be and that they should be approached with extreme caution, as they are still a relatively young asset class, unlike gold and silver, which have over 10,000 years of history backing them up as a safe store of value.

Bitcoin does, however, have strong long-term fundamentals as a competing "fiat-lite" currency, which in my opinion makes it vastly superior to the current corrupt dollar-based fiat system we find ourselves in at the moment.

These fundamentals are only growing stronger with each passing day, as Bitcoin continues its long march across the globe, becoming more and more commonplace in the world of commerce.

As recently pointed out by Cointelegraph, there are now over 5,000 Bitcoin ATM's around the world in about 90 different countries, with 150 of these being installed in the month of June alone. This equates to six new Bitcoin ATM's per day.

Bitcoin is also going to have its block mining reward halved once again, in just eleven short months from now in May 2020. This, as it did last time, should ultimately result in Bitcoin settling in at a higher price level.

Additionally, the Bitcoin network is more secure than it has ever been before, with the total computing power, aka the Bitcoin hash rate, hitting a recent all time high of 65,000,000 TH/s.

This level of security is one of the many reasons why Bitcoin is going to remain the big dog in the cryptocurrency house, and makes it the first go-to choice for those looking to get into the sector.

As you can see, overall, I continue to have faith in Bitcoin. I believe it will continue to play a valuable role in the monetary markets moving forward, and in the long term, I believe that the price is going to continue to move steadily higher, despite its many setbacks.

However, these recent price actions are not healthy and are detrimental to the overall state of the Bitcoin markets. They are a reminder that absolutely nothing goes straight up forever and that the rules of basic economics still apply.

Bitcoin to the moon? Clearly not today. However, who knows what the future will bring.

robert
Reply
Dear Nathan - I don't understand why you would label Bitcoin "fiat-lite" currency. Bitcoin is hard money and arguably the hardest money ever utilized by man, harder even than gold bec there can only and ever be 21,000,000 bitcoins. And as you mentioned, once the halving occurs in 2020, its stock to flow ratio will be about the same as gold now. It will only decrease from there whereas gold is about 2-3% per annum. And Bitcoin is certainly not money by decree [fiat] of government... so why the "fiat-lite" comment? Is it from the argument of "no intrinsic value" like gold [not true]? Or the argument that bitcoins are created out of "thin air" [not true]? I don't understand. Please advise. regards robert
Reply
Leave a Comment