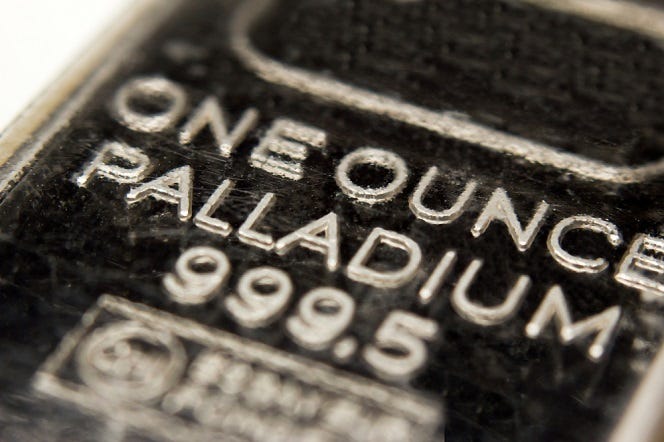 With spot palladium seemingly at another crossroads, here's an update on the epic supply squeeze that has sparked a near double in price since August 2018.

Again, our interest in palladium is not as an investment or a fiat-making opportunity. The hope is that the LBMA/COMEX palladium "market", which is structured identically to the LBMA/COMEX gold and silver "markets", will collapse and then shed light upon the fraud that exists in these pricing schemes. We've written about this on multiple occasions over the past six months and here are a few of the links:

And now prices appear once again to be at a crossroads. Since this supply squeeze began last August, price maintained a general uptrend. As you can see on the chart below, nothing about this suggests "bubble" or "speculative blowoff". Instead, the steady nature of the rally underscores the fundamental drive of tight physical supply.

However, two physical tightness indicators that we've been following since this rally started have begun to moderate. First, the backwardation of the COMEX futures board has narrowed. At times, the spread from spot to the most distant future contract exceeded $100. As of March 26, it's back to less than $40.

Perhaps more telling are the lease rates for physical palladium in London. Earlier this year, these rates exceeded 20% at times. As you can see below in the information provided by David Jensen, these rates are now back to near 5% and are continuing to decline.

So has the run in palladium ended? Have The Banks managed to wriggle off the hook again, and will their scheme of fractional reserve and derivative pricing be allowed to continue?

Well, the chart above shows that price is still well within the channel that has contained it on its upward move since August. Only when price falls out of this channel can we begin to assume that the party is over and The Banks have won.

However, a short-term indicator may provide the first signal, and it needs to be monitored this week. Rather amazingly, the spot price of palladium has managed to remain above its 20-day moving average for nearly the entire move since August. This is really quite remarkable when you pause to think about it. And now, as of March 26, the spot price is right on top of this technical indicator again… just as it was on several occasions in the past, most recently in late January. If price breaks down significantly below this very short-term moving average, then you'll have a clear signal that palladium is about to have its first major correction in price since 2018.

We should also take time today to update the delivery process of the March 2019 COMEX palladium futures contract. As we noted back in February, March is a "delivery month" for COMEX palladium, and with tight global supplies, it would be interesting to see if any parties "stand for delivery" during the calendar month.

First, keep in mind that the COMEX palladium "market" is wildly more leveraged than gold and silver. See below:

When the March19 contract went off the board in late February, there were 213 contracts still open and apparently "standing for delivery". As of Monday, March 25, only 89 total "deliveries" have been made. This is supposed to indicate "delivery" of 8,900 ounces, or about 20% of the total COMEX inventory.

And lastly note this... On the CME report that shows specific issues and stops for each Bank and Dealer, the accounts of JPMorgan have only shown:

• and ZERO activity by the house or proprietary account of JPMorgan

So where are the actual deliveries that purport to provide legitimacy to the COMEX derivative pricing scheme? The Vault Stock reports clearly show ZERO movement of actual metal within the system, and no party seeking physical delivery can be shown to have actually taken possession.

My goodness gracious. What a scam this all is.

If anything, if The Banks' palladium crisis does indeed pass without a market failure, then at least it has demonstrated for all to see the utter sham and fraud that underlies the COMEX physical delivery process.

But again, it's not time to give up hope just yet. Perhaps price will hold the 20-day and/or the channel that has supported the rally since last summer. And then, with a little luck, maybe we'll still see that epic supply squeeze, force majeure, and a fraud-exposing market failure.

Keep watch with your fingers crossed, and we'll keep you updated in the weeks to come.

Hworld
Reply
Hey, thank you very much for the information! Is there a way I can get more info on the matter? So I can make a post on my local university about this? https://uautonoma.cl/ Thank you very much in advance!
Reply
Leave a Comment