Peak in Yields Is Close

When it comes to FOMC meetings, I always say “Don’t trust the first move” immediately after the announcement and the follow-up press conference. Yesterday was no different.

The initial response to the announcement was that the Fed was “uber dovish.” Bond yields eased back from their peaks earlier in the day, the dollar dumped, and Gold rose from the 1720s to 1750s. Silver and the miners followed suit. I didn’t buy it, citing 1760-65 in Gold as resistance and this: 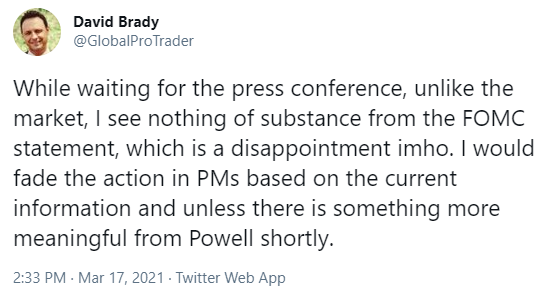 In fact, the Fed stated that it planned to increase the Reverse Repo Program from $30bln to $80bln, which effectively drains liquidity from the system. This is the opposite of ‘QE’, which is negative for almost all assets except the dollar. Once the initial optimism wore off, yields reversed back to their highs, with the 30-Year now at a new high of 2.48%. The 10-Year real yield also hit a new high of -0.59%, surpassing the previous high of -0.60%. Gold peaked at 1754 and turned south. Silver and the miners did the same.

Fast forward to this morning and we get the following headline, courtesy of Zerohedge and Zoltan Pozsar (formerly of the New York Fed and currently at Credit Suisse):

In it, he suggests that the Fed is not going to extend the SLR exemption allowing banks to increase their balance sheets and buy the increasing amount of U.S. Treasury Bonds issued to finance increasing government spending. I responded as follows: 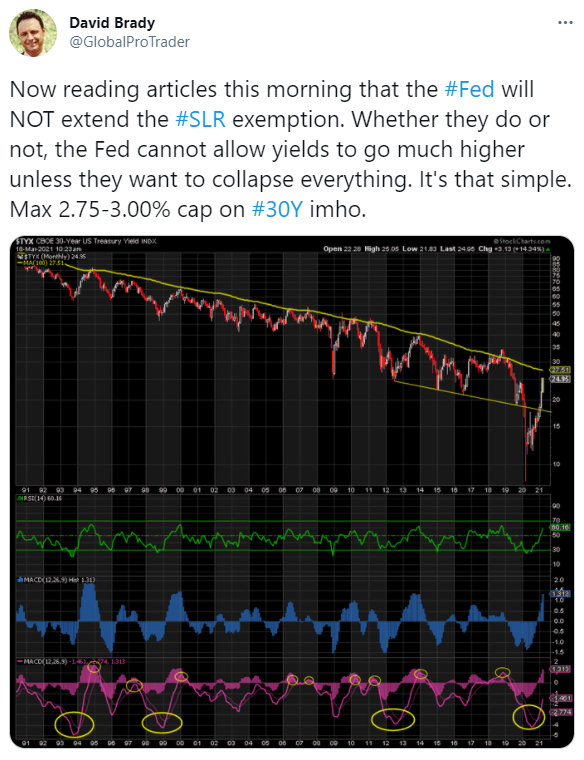 Then I explained why: 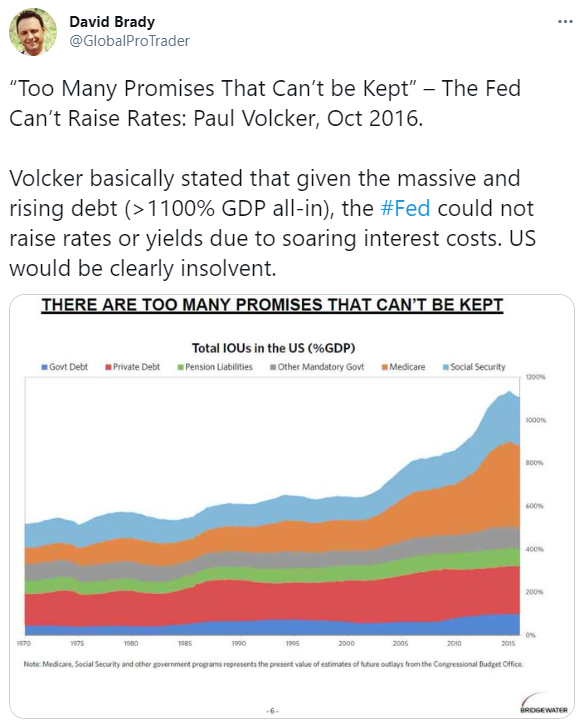 By the way, I first tweeted that chart back in 2017, and debt has only ballooned even further since then. This is one of the reasons why I expected hyperstagflation, because it is clearly unpayable. We can’t grow our way out of this. There are only two solutions: default or inflate it away. Politicians have almost always chosen the latter. Everything that has happened since then just confirms this. All one has to do is go back and look at what happened to Gold and Silver in the 1970s to understand what this means for the precious metals going forward.

Back in the ‘70s, the dollar was reeling on global financial markets following the closure of the Gold Window by Nixon in 1971. At one point, the U.S. government had to issue a bond in Swiss Francs because the dollar was effectively untouchable. The dollar’s weakness sparked a massive increase in inflation while the economy was in recession—the definition of stagflation. If something wasn’t done quickly, the dollar’s position as the global reserve currency was in jeopardy. Enter Fed Chair Paul Volcker. He raised interest rates and bond yields to 15-20% to conquer inflation and restore confidence in the dollar. Obviously, it worked. The dollar is still the global reserve currency today.

However, the difference between now and then is critical. Back then, U.S. government debt was just over 40% of GDP. Today, it is well over 100% and rising fast. Spending is more than double annual Tax Receipts and is only likely to increase. This means that the option to jack up interest rates and bond yields is not available to the Fed this time around. Why? Because the interest on the truly gargantuan amount of debt would be enormous and effectively render the U.S. insolvent. Once anyone has to borrow to pay the interest on their debt, forget the principal, they’re effectively bankrupt. All that is left is for the central bank to monetize the debt themselves by buying it. This is effectively what Modern Monetary Theory, or MMT, is all about. The government continues to spend more than it makes in tax receipts and the Fed buys the debt to fund the difference. This is starkly reminiscent of what the Reichsbank did in Weimar Germany in the 1920s.

Back to the above tweet: Volcker himself confirmed that because of the United States’ enormous debt position, raising interest rates and bond yields was not an option this time around. The dollar would ultimately collapse just as the Reichsmark did. Given that the dollar is the global reserve currency, this would in all probability cause the collapse of the global financial system. I believe this is inevitable, hence the need for a ‘Great Monetary Renegotiation’, as the IMF calls it, but the Fed will try to kick the can down the road as long as possible.

Simply put, the Fed cannot allow yields to go much higher, and whether it’s an extension of the SLR exemption, a new Operation Twist, or trillions more of QE, I believe it is only a matter of time before the Fed intervenes to cap yields. The only alternative is a deflationary scare and yields fall of their own accord. But the Fed could not allow deflation to take hold either, so the result would be the same: more money printing. If March and August 2020 tell us anything, it’s that liquidity is what drives centrally-managed markets today, and when the Fed’s hand is forced to step in again, Gold, Silver, and the miners will take off. Given that yields are approaching key resistance levels, that rally may have already begun. And if not, it’s not far away, imho.