President-Elect Biden, as the media have crowned him, is still not officially the president ‘yet’. Uncertainty remains, which markets detest. The likelihood of new fiscal stimulus is remote until certainty is restored and the official result is confirmed. Even when we do get new fiscal stimulus, its size could be determined by whether or not the Republicans or the Democrats control the Senate. That said, if we get a sharp correction in stocks, look for the Fed to step in to calm the waters until we get resolution on the political front.

The point being that stimulus is inevitable, but when and how big it will be still remains uncertain. In the meantime, precious metals and miners remain under pressure, but if the rally since March is anything to go by, when the next stimulus does occur, do not be surprised to see new record highs ahead.

Given the extent of the rally since March, it makes sense that precious metals should suffer to a greater extent than other markets on a relative basis. That said, while correlations break down frequently, the underperformance of Gold relative to other asset classes recently is notable. 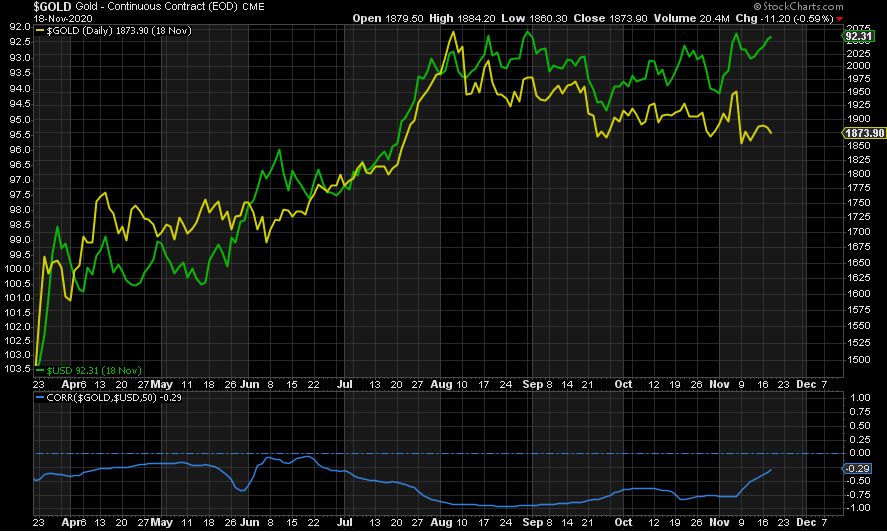 When Gold rises, the dollar falls, and vice-versa. Gold had been near perfectly negatively correlated to the DXY since March, but that has broken down since its August peak. Gold is falling while the DXY remains stuck in a range between 92 and 94.50. So why is Gold underperforming the dollar now? Taken alone, this may not be a big deal, but it’s not the only correlation that is breaking down relative to Gold. 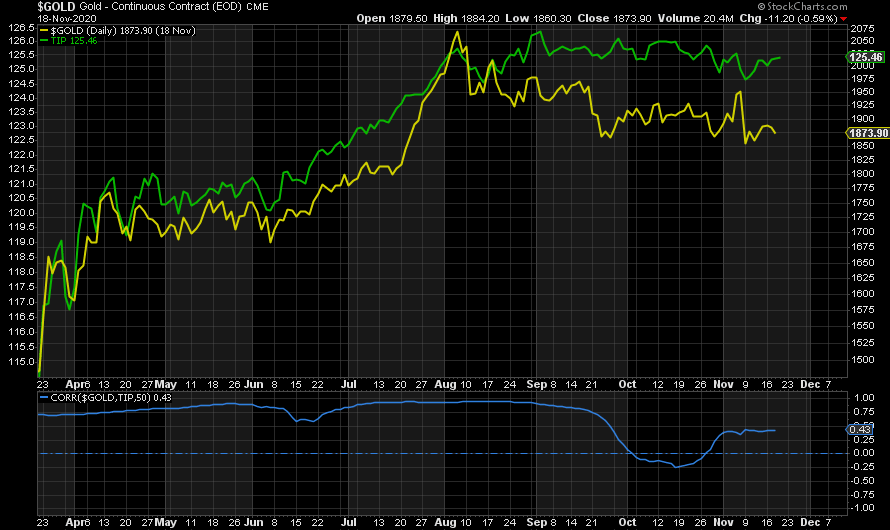 When real yields fall, Gold rises, and vice-versa. TIP prices are near perfectly inversely correlated to real rates, which means when TIP rises, so does Gold, and vice versa. As we can see above, TIP and therefore real rates have been relatively flat (just like the dollar) since August, yet Gold remains under pressure. Why? 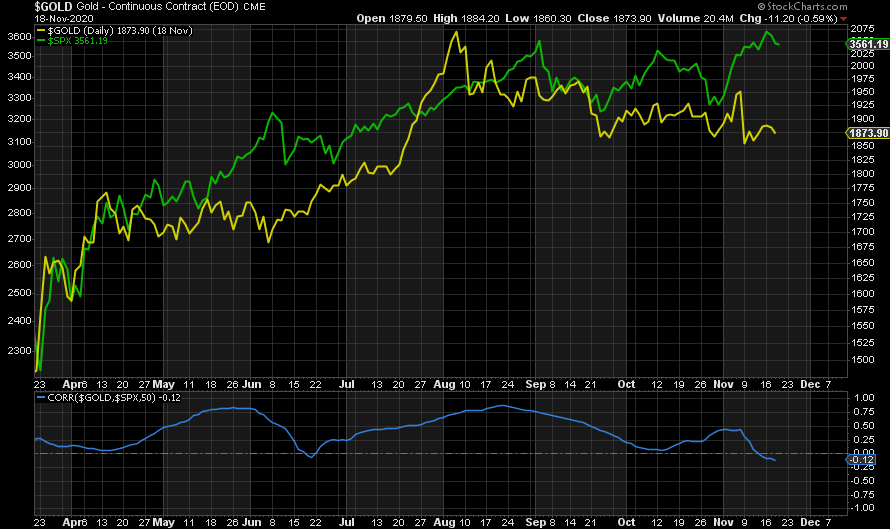 Both Gold and Stocks benefited from the massive stimulus following the March lows and rose together until the peak in Gold in August. Since then, the S&P 500 has risen to new record highs while Gold has gone in the opposite direction. Why? 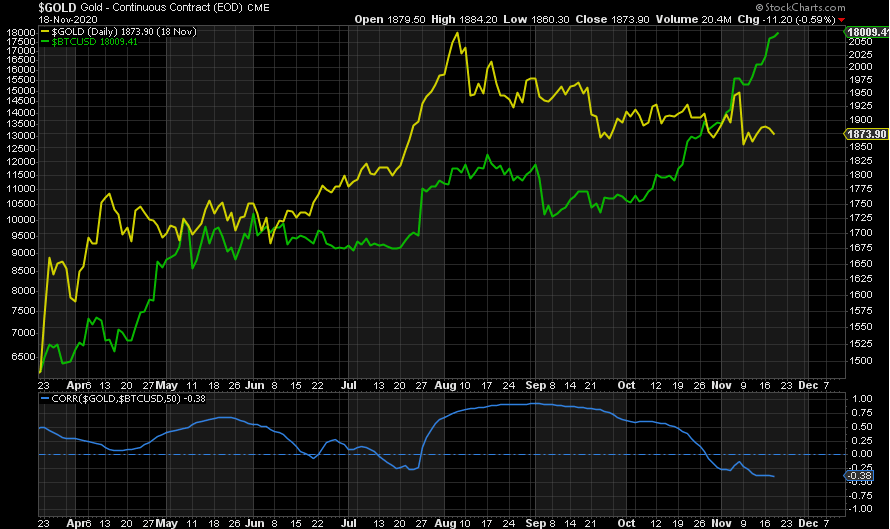 Further evidence to emphasize that the relative underperformance of Gold et al. is not an isolated incident, Gold is massively underperforming Bitcoin now. While they are not consistently highly correlated, it makes sense that they rallied together off the March lows as the dollar was crushed by massive fiscal and monetary stimulus. Yet the divergence recently is astounding. Since August, they’re going in completely different directions. Is this the substitution effect taking hold, where people—especially the younger among us—switch from Gold to Bitcoin, or is it FOMO at work in Bitcoin? Perhaps. But when taken with the other disparities shown here, I doubt it.

Why this is happening is open to debate and that’s a topic for another day, but the beauty of correlations that have stood the test of time is that while they may break down over short periods, they tend to re-establish themselves thereafter. In this case, this means that either stocks have to fall, the dollar has to rise, real rates have to rise, Bitcoin has to fall, or Gold has to catch up to them all, or all of the above, which is bullish precious metals on a relative basis going forward.

… I can safely say that sentiment is not just in the bathroom but exploring the tunnels below. Again, this is the ideal scenario for a mega rally in Gold et al. to follow:

At the same time, the Large Speculators have dramatically cut their net long positions: 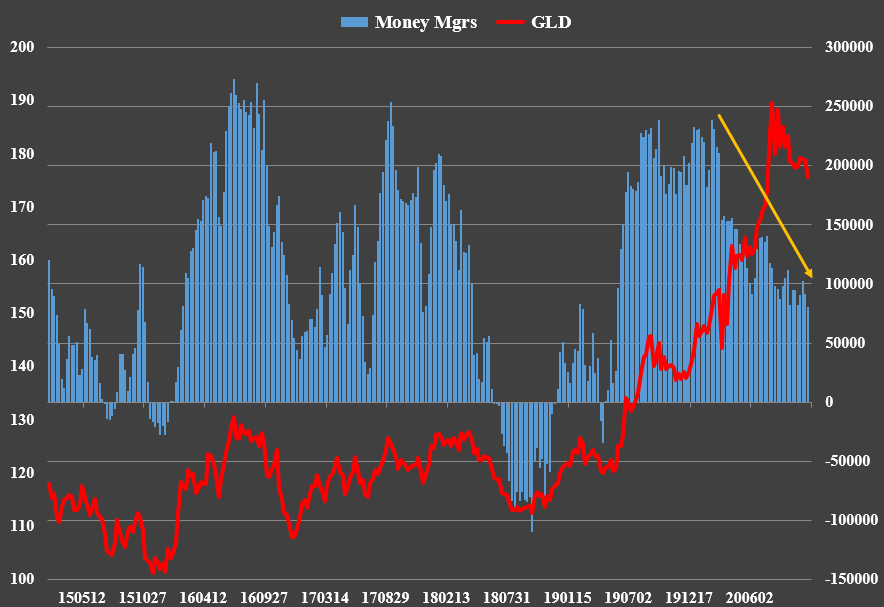 Hedge Funds began exiting the market well ahead of the peak in Gold, illustrating that they got this one right. This is out of character for the Funds, as they tend to be wrong at extremes while the Banks are almost always right. If the historic pattern reasserts itself, their lowest long position since mid-2019 suggests we’re about to turn up again soon. Either that or the COMEX collapses altogether. 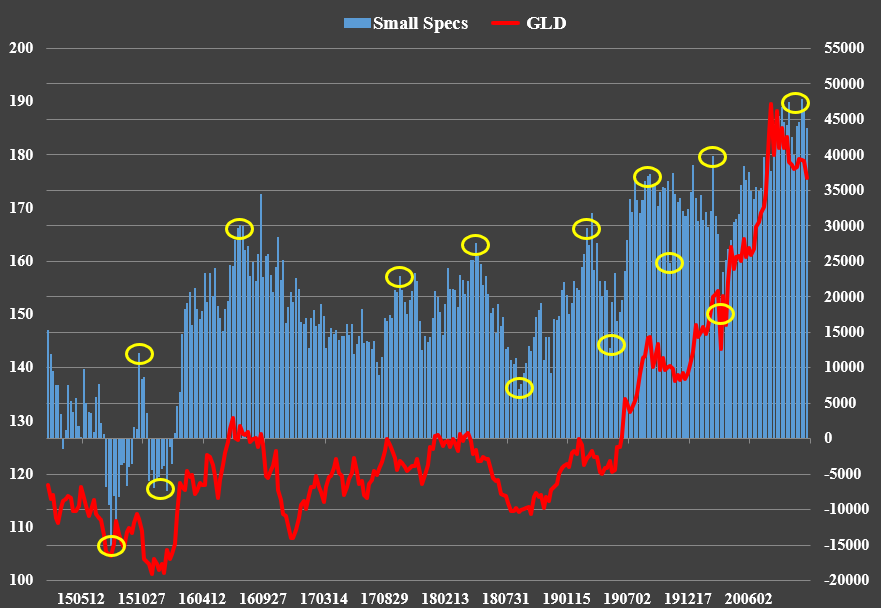 The only caveat is that small specs’ record long positioning is not reflecting the collapse in sentiment and may have a lot of catching up to do on the downside. They have been notoriously wrong for years and are called the dumbest of money for a reason. That said, this does not preclude a blow-off top in Gold et al. before a bigger correction occurs next. 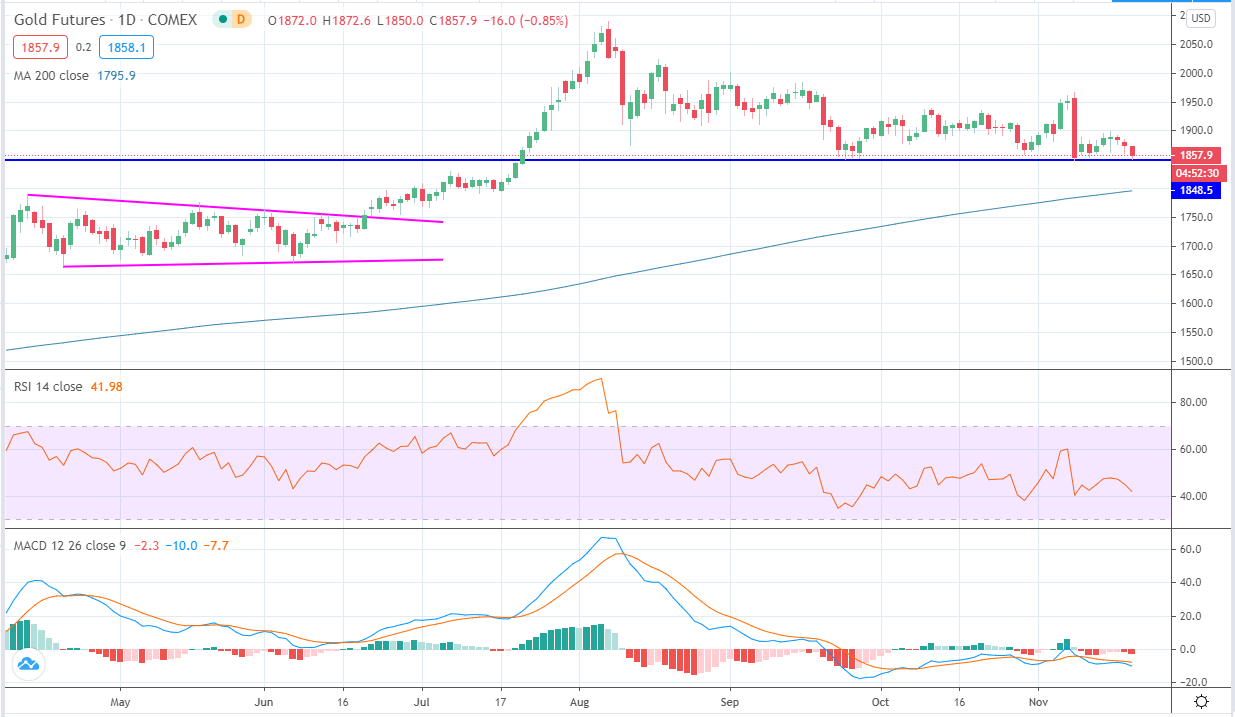 Gold continues to flirt with support at 1850, and it’s becoming more frequent. Typically this means that a breakdown is coming. 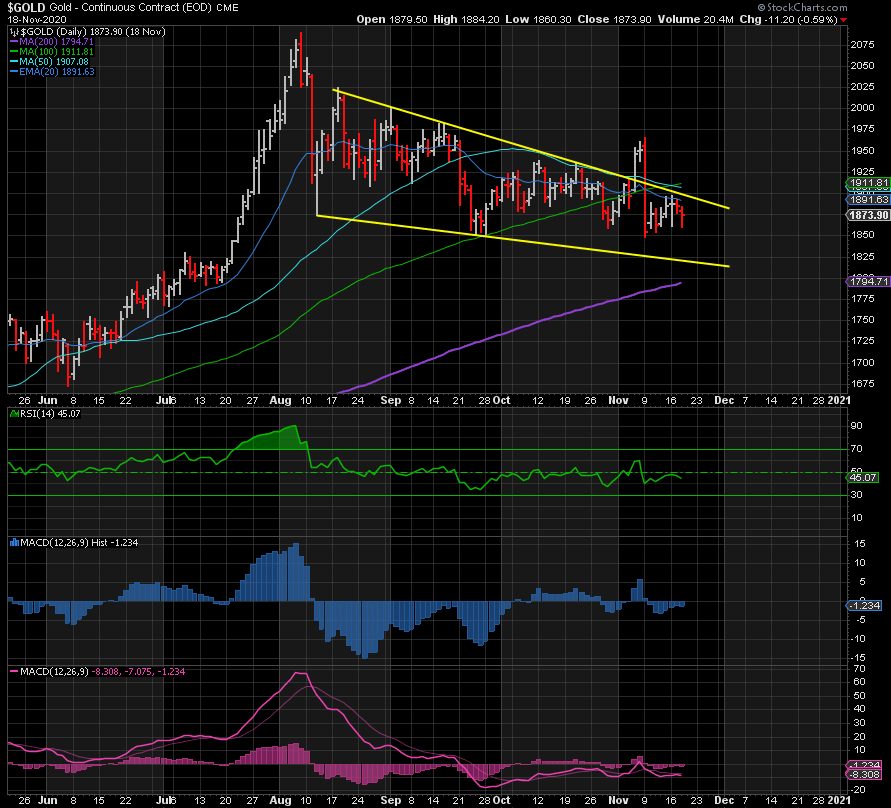 Should we break 1850 support conclusively, the next support is around 1820, the bottom of the bull flag in place since August. I would not rule out a fake breakdown to 1800 or even below the 200-day moving average coming up fast towards the 1800 support level, my primary target on the downside since July. Below there 1750 comes into play, with 1670 critical support below there.

On the contrary, a break of the recent high of ~1900 would be an initial indication that the bottom is in place. A break of 1966 would be the closest thing we get to a confirmation. The same goes for 26.14 in Silver.

We enjoyed a truly massive rally from the lows in March to new record highs. That rally was preceded by a massive sell-off. The dump into the March lows was a violent one, taking just days to erase $250 of gains. Assuming that was a wave 2 correction, it should be expected following wave 3 that we get a long drawn out and measured correction in wave 4, which is exactly what is happening. This sets us up perfectly for a wave 5 rally that could eclipse that of wave 3, which has been my expectation since July: Wave 3 was just a preview, next comes the main event. All that we are waiting for is the bottom of wave 4. While nothing is certain in markets, the odds favor this scenario.

Sentiment has almost completely capitulated, save for the positioning in Small Specs. The extreme overbought conditions in August have been completely erased. The stimulus that triggered the inception of the rally in March has been temporarily reduced significantly, but the next round is inevitable, imho, and promises to be far, far larger in scale. The alternative is total global economic, financial, and systemic collapse. Unless the politicians and central bankers choose the Everything Collapse, which if history does rhyme is highly doubtful, then the risk-reward for precious metals is heavily skewed to the upside once we bottom out here soon.