Everything is Looking Up

Today, I am going to quickly go through my process and the various reasons why I believe Gold, and therefore Silver and the miners too, has bottomed or is close to doing so.

Liquidity, in the form of fiscal and monetary stimulus combined, is the primary fundamental force in all markets these days, including Gold and Silver. Soon after the Fed began tapering its injections into the repo market on February 19, Gold and Silver dumped to their lows in March 2020. Silver hit a new low of $11 not seen in over a decade. Then the U.S. government started sending out checks in the mail. The Fed responded by slashing the Fed Funds rate by 1% on a Sunday and announcing that they would do “whatever it takes” to support the economy (and market). They proceeded to expand their balance sheet by $3 TRILLION in just three months. That set off a rally in Gold to new record highs in almost every currency on the planet and Silver to its highest level since 2013.

Then in July, the Fed tapered its monetary stimulus by 75% followed quickly by the expiration of that emergency fiscal stimulus in August. Gold and Silver peaked on August 7.

Fast forward to today, and the IMF has called on governments around the world to spend, spend, and then spend some more starting this month. The Biden administration has just passed a $1.9 trillion stimulus bill, much of which will go into circulation within the economy, with a promise of more to come. The Fed just reiterated their plan to do “whatever it takes” again at its previous FOMC meeting. Everyone but those with the shortest memories understand where this is headed. One can only imagine how high Gold and Silver could go, especially the miners, if we get universal basic income.

Real yields are simply calculated by subtracting inflation from nominal bond yields. Given that the official CPI has been relatively flat for years, it is no surprise that the peaks and troughs in nominal yields are also inversely correlated to Gold and Silver.

I prefer to use the 30Y nominal bond yield for this purpose given the reliability of its 100-month moving average as a cap on yields for the past 30 years: 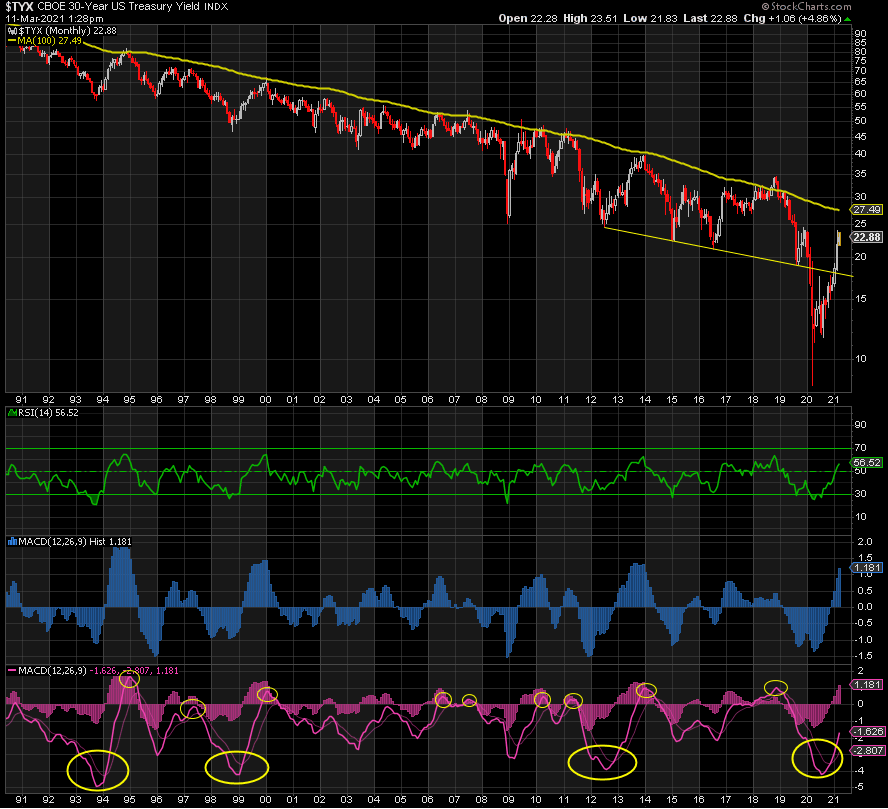 In October 2018, based on this 100-month moving average, I tweeted the following:

The rest is history, thanks to that moving average.

Now we’re once again approaching that moving average at 2.75%. We could go up to that level or slightly above, but if we do and history repeats itself, there is a high probability that yields will be capped or fall again, even to lower lows.

Either that or we get a negatively divergent higher high: 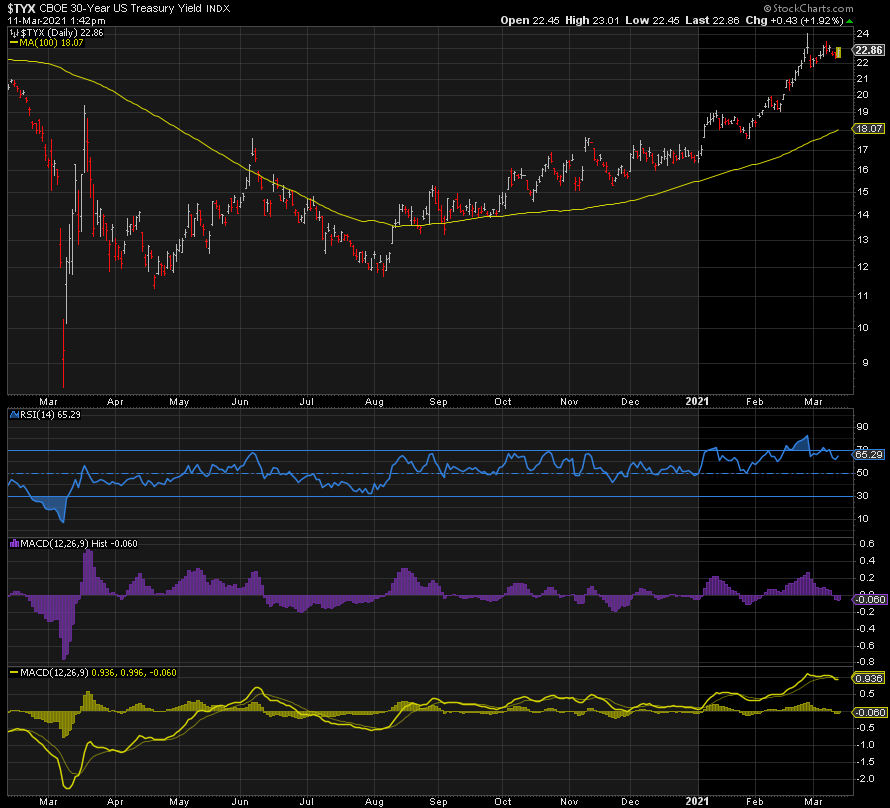 The 30-year yield peaked at 2.41% on February 25. At that point, its daily RSI was at 84, the highest level since December 2016. The MACD was also at its highest level since December 2016. What also happened in December 2016? Gold bottomed at 1124. We haven’t seen that price since. Such an extreme in both the RSI and MACD may signal that a blow-off top is already in place OR we get one more higher high in yields but a lower RSI and MACD at the same time—i.e., a negatively divergent higher high.

To summarize, either we have already peaked in yields or we’re heading up one more time to anywhere between 2.40%-3.00% in the 30-year and then we get the peak in yields and the bottom in precious metals. Put simply, the bottom may already be in place in Gold or we have one more dip to come. Either way, the risk-reward is significantly skewed to the upside once we finally hit bottom.

One last note… if the peak in yields is driven by the Fed’s decision to cap yields—otherwise known as yield curve control—and inflation heads higher, then there is asymmetric risk to the downside in real yields, which, as I outlined above, are inversely correlated to Gold and Silver. Again, it’s only a matter of how high they could go after that.

The Money Managers, or so-called “dumb money”, have cut their net long position to the lowest level since June 2019. They are inappropriately called the dumb money because they tend to be wrong at extremes. In other words, when they hold a small long position or are short, Gold tends to rise thereafter. 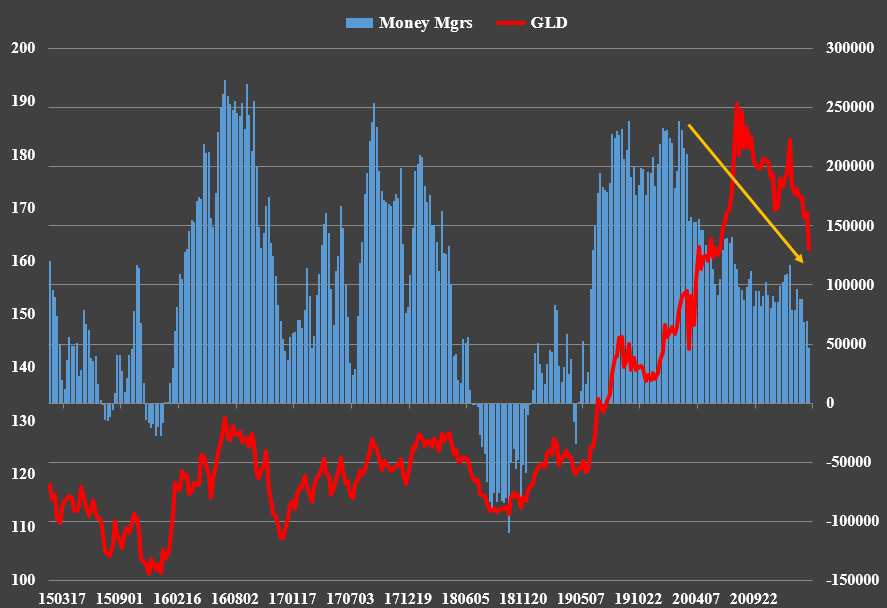 Meanwhile, the Banks have been slashing their net short position at the fastest pace since October 2018. Remember what happened back then? The 30-year yield peaked, and Gold and Silver bottomed. Coincidence? I think not. 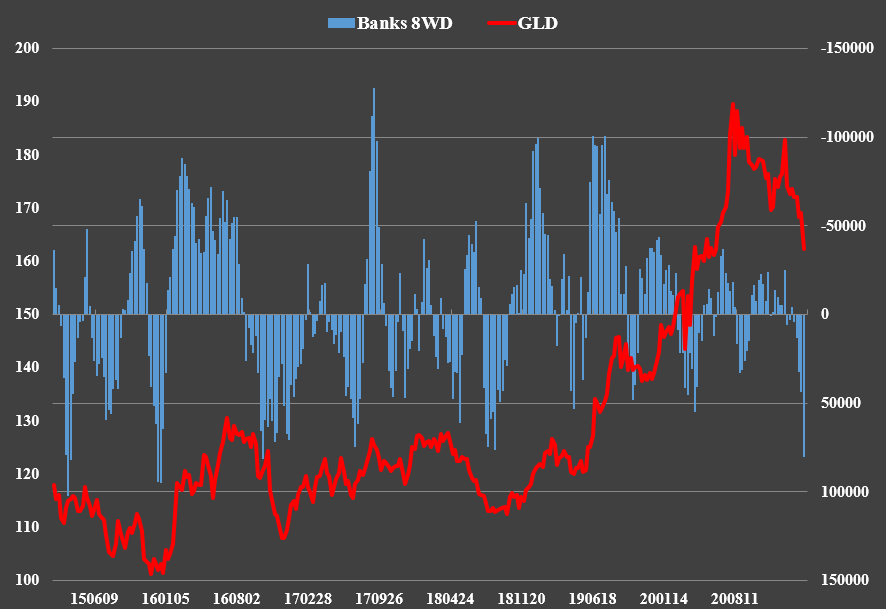 Finally, open interest has collapsed to its lowest level since April 2019. Prior to that, it was only lower in November 2018 and December 2016. Again, what happened to Gold back then? 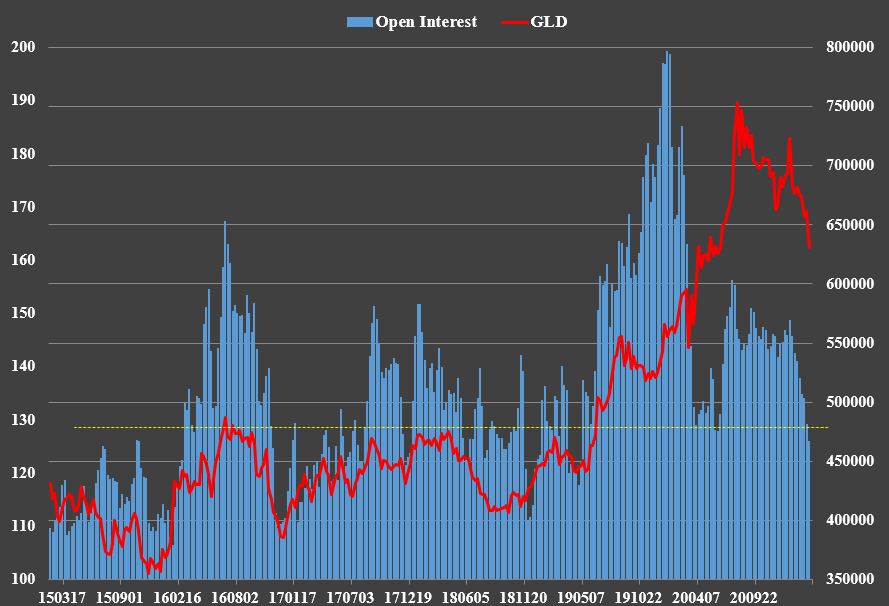 In summary, while the Banks remain somewhat short and could trim that position further, overall positioning data also signals that the bottom is in place or close.

Sentiment is a consistently accurate contrarian indicator, especially in the precious metals sector. Everyone becomes greedy and euphoric near peaks—i.e., extremely bullish—and are throwing in the towel near troughs—i.e., extremely bearish. Emotion is the death of portfolios. We saw this in March 2020 when everyone was bearish and in August 2020 when everyone was bullish. Now we are seeing bearishness at levels that are below those in March. This is yet another signal that the bottom is in or close.

To say that Gold became extreme oversold at 1680 is an understatement. We may have seen the bottom OR we get a bounce, then head down to a lower low in price and a higher low in the RSI and MACD. This is the definition of a positively divergent lower low. 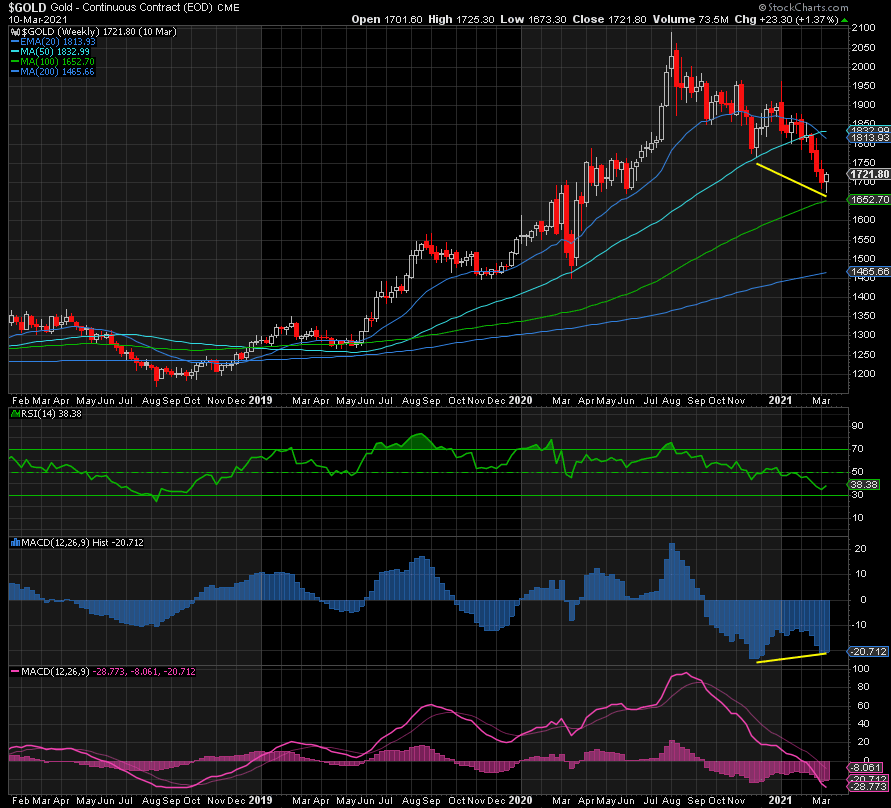 My process is based on the use of multiple disciplines in combination with one another. I believe each tool has its merits because they are all widely used, including Elliott Wave Theory and Fibonacci levels. But while many analysts choose to focus on just one or two, I prefer to use them all. Why not? If they all point in the same direction, you can have a greater degree of confidence in your swing trades and investments.

In order to fine tune this process, I went back over all of the major peaks and troughs in every asset class for the past 15-20 years to identify consistent patterns with respect to each discipline. You would be amazed at just how consistent these signals are. But the true payoff is when all of these tools click together at the same time. This is one of those times. Everything is pointing up. While my process does not provide a 100% guarantee of accuracy, it is extremely accurate most of the time. It says that precious metals and miners may have a little more downside, but given the risk-reward to the upside from here, if you don’t own at least some of them already, you are likely to regret it in the weeks, months, and years ahead.