Just as the economy was finding its feet and starting some form of recovery in earnest, the reality of 2020 is sinking in once again, with cases of COVID-19 rising rapidly across both North America and Europe.

Some of this has to do with better testing and some if it has to do with the greatly increased knowledge we have about the virus. However, a significant proportion of it comes down to complacency and people's desire to live their lives in as normal a fashion as they possibly can in this upside down world.

Regardless of the why, the markets are reacting, and they are suffering negatively because of it.

Markets Drop Across the Board

Renewed fears of an economic shutdown is scaring market participants the most, as it appears more and more likely that Joe Biden will become the next President of the United States despite President Trump's continued fight in that arena.

Joe Biden and his closest allies have stated repeatedly that they are not taking a mass shutdown off the table and are indicating that it is a very likely possibility in their attempt to battle the spread of COVID-19 once he takes office.

Many people laugh at this notion, as they believe that it is simply too late to stop the spread of the virus and only a mass national vaccination program will help alleviate the problem—either that or simple herd immunity over time. Yet fears about people's willingness to take the first wave of vaccines is a real concern for the markets. 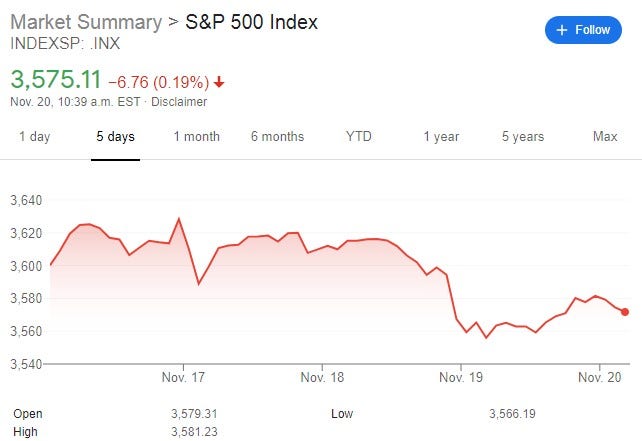 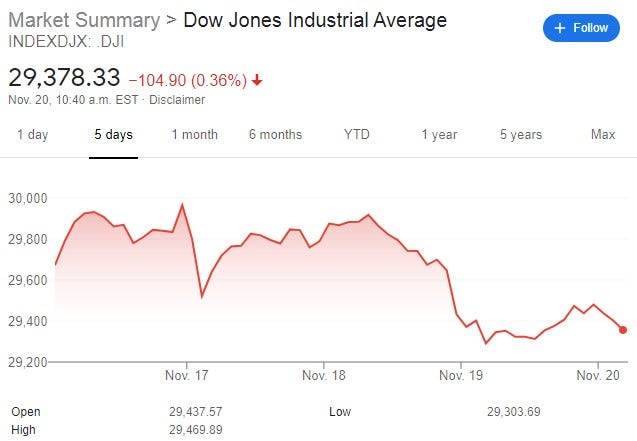 These various concerns are what is causing the recent market volatility, as speculation of what is coming next begins to run rampant in the minds of many investors.

Recent polling from across Canada has indicated that support for taking a COVID-19 vaccine is rising from recent levels. However, many are still anxious about taking what they believe to be a "hastily" approved vaccine.

A new poll suggests the proportion of Canadians planning to get vaccinated for COVID-19 is on the rise after encouraging initial results from Pfizer’s vaccine trial.

Sixty-nine per cent of respondents said they plan to get inoculated against the novel coronavirus once Health Canada approves a vaccine that is broadly available and free, according to a survey by Leger and the Association for Canadian Studies.

The number is a jump from the 63 per cent who said they would take up such an offer one month ago, and a return to levels of vaccine enthusiasm reported in a similar poll in July.

Similar polling, carried out for Global News between October 23-26 by Ipsos, found that just 54 per cent of the Canadian public is willing to take a vaccine as soon as they can. Of that figure, only 22 per cent feel strongly about taking a vaccine right away.

What this means is that there is going to be heavy resistance to taking the first round of COVID-19 vaccines from a large percentage of the population, and despite what your personal beliefs may be surrounding this controversial topic, this has the markets and governments around the world rattled.

China Steams Ahead with Vaccinations

One country that is not waiting for global approval in regards to a standardized COVID-19 vaccine is China, which has to date vaccinated over 1 million citizens under the "emergency use" designation.

This vaccination campaign by the Chinese government is much higher than what Western officials previously believed and has been largely targeted towards troops and those in peacekeeping positions, according to government officials.

Unsurprisingly to many, Russia made recent news by joining China in issuing "still in clinical trial" doses of their COVID-19 vaccine.

Russia and China are the only two countries actively working to develop a vaccine that have used emergency measures to vaccinate large swaths of their populations. Russian President Vladimir Putin even claimed earlier this year that one of his adult daughters had been inoculated in one of the early-stage trials for the vaccine developed by the Gamaleya Institute.

The rush to profit off of an effective COVID-19 vaccine is truly underway at this point, with countries such as Brazil already signing a contract to purchase the Chinese COVID-19 vaccine, while others such as Turkey are also entertaining the idea.

Meanwhile in North America, Pfizer, Moderna, and other western corporations are signing deals with countries all around the world, as they each claim to be close to having an effective vaccine.

The markets remain rattled at the moment, fearing renewed, potential lockdowns while also fearing the effectiveness and willingness of the public to take a newly released COVID-19 vaccine.

However, they need fear not, as big daddy government is soon to be coming to the rescue once again, revving up the printing presses and issuing stimulus checks galore—of that you can rest assured.

As previously stated, it mattered little who won the election if money printing was first and foremost on your mind, as both Donald Trump and Joe Biden plan to do just that.

In this scenario both gold and silver bullion remain strong buys, in my personal opinion, with dollar cost averaging being the continued preferred method of acquisition, riding out the highs and the lows in stride.

The year 2020 will remain volatile right until it closes its chapter in the history books. However, sanity will eventually return and a new normal will be resumed— yet with much uncertainty remaining as we head into 2021.

Until that time, stay safe and as always, keep stacking.