Well, here we go again. It's January, so that means it's annual forecast time—that time of year when I walk the plank knowing full well I may end up plunging into the sea. And for what reason? I'm not sure. The screenshot below is taken from the opening paragraph of our 2020 macrocast, and this same sentiment holds today:

So let's begin by recalling the past. Though TFMR has been around for over a decade, I only began the habit of printing these annual "macrocasts" back in 2017. Thus far, the track record has been pretty solid, but as with everything else in investing, past performance is no guarantee of future results.

And why would that be? Once again, there are an abundance of Fed shills, stock pumpers, and permabears who are proudly proclaiming that "gold and silver have topped" and that other investments are a much better safe haven in the final stages of the great Keynesian Experiment. Last year at this time, many of these same "analysts" proudly projected that interest rates would rise, the dollar would rally, the U.S. economy would grow, and that precious metals were dead money. They were wrong last year, and they'll be wrong again in 2021. Why?

For the answer, we simply need to look back to the final months of 2018. What occurred then that has pushed gold and silver prices higher ever since? Simply put, the final change in Fed policy. For the five years between 2013 and 2018, The Fed was able to support an illusion. And what was that? That all was well. That their balance sheet would be reduced back to pre-2009 levels and that interest rates would soon head back to historical norms, too. The Fed was able to pretend that this was the case until, finally, their beloved "stock market" broke under the pressure of a contracting money supply. Do you recall December 2018? Have you already forgotten? It was so bad that Treasury Secretary Mnuchin had to convene an emergency meeting of The President's Working Group On Financial Markets—AKA "The Plunge Protection Team"—on Christmas Eve!

From that moment, everything changed. Bonds began to rally, and real interest rates began to fall. The Fed formally announced a reversal of their tightening scheme in June of 2019, and we have had a consistent bull market in the precious metals ever since.

Recognizing the sea change that occurred in late 2018, our forecast for 2019 was for an upside breakout from the range that had contained the gold price since 2013. This was a pretty lonely branch to sit at the end of...but the forecast was proven correct. Our goal was a gold price between $1480 and $1520, and after a sharp summer rally and autumn consolidation, COMEX gold finished at $1519.95.

We expected the same conditions that drove price in 2019 to continue into 2020 and published a forecast back in early January of $1800 COMEX gold. As you know, price peaked near $2100 last summer and finished the year at $1901. That's another pretty substantial annual gain and in line with what you'd expect during a bull market. See this chart below courtesy of Ronni Stoeferle and his team at Incrementum AG: 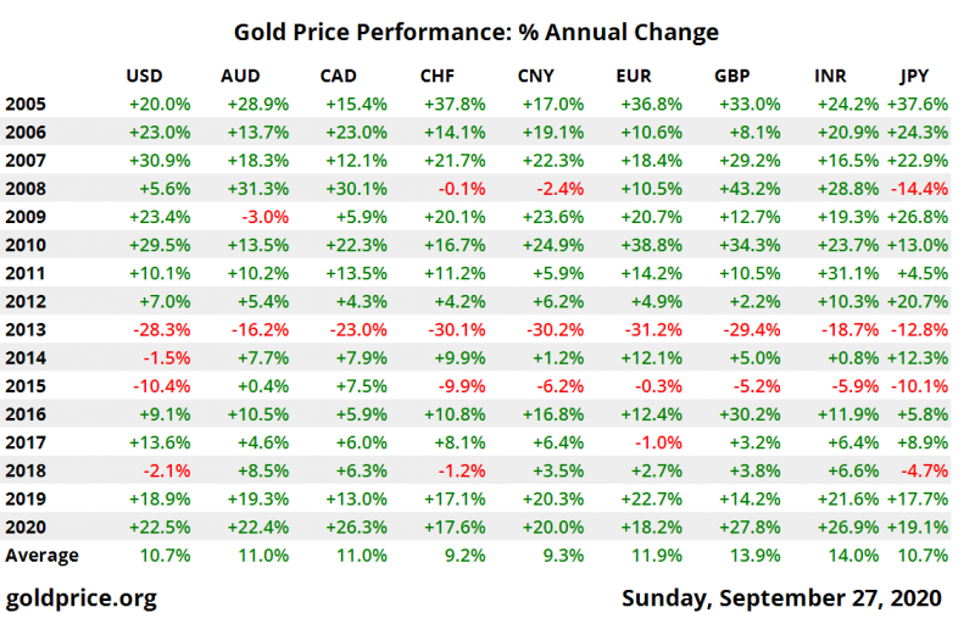 Note that 2019 and 2020 have posted annual gains similar to those seen in the previous bull market of 2005-2011. With macroeconomic forces and Fed policy remaining unchanged in 2021, why not expect another 20%+ year in COMEX gold? In fact, you should expect another good year.

Where the aforementioned "analysts" get their forecasts wrong is in a misunderstanding of The Fed's role in all of this. Chief Powell and his Fed have assured us of many things in the months ahead, most notably:

Given the old trader's adage, perhaps this macrocast should simply be titled "Don't Fight The Fed"? In the end, it may not be a whole lot more complicated than that.

And then keep in mind two other very important macro factors. First, after decades of fighting against a higher gold price (as diligently documented by GATA), The Fed and the other major central banks could actually benefit from a higher gold price going forward. These central bankers are not only desperate to spark price inflation, they are equally desperate to slay the ghost of disinflationary expectations. Powell stated this explicitly in his Jackson Hole speech of last August. A rising gold price would clearly help them reach both goals.

But what about inflation in real time as measured by the faulty CPI? How can The Fed spark rising prices? One of the simplest ways is to encourage a lower dollar, which in turn leads to higher input costs for commodities such as crude oil and copper. If producers are then able to pass along these higher costs, they will then push inflation higher. This is the classic definition of "Cost-Push Inflation" that you may recall from that Econ 101 class you slept through in college: Cost-Push Inflation

So, again, this isn't complicated. Don't fight The Fed.

And this leads to a very interesting situation for silver, too. If we are indeed in the early stages of a general commodity bull market resurgence—as expert analysts such as Ronni Stoeferle and Tavi Costa suggest—then we should expect silver, which 99% of the world sees as a "commodity", to perform quite well in 2021. And again, if commodities are breaking out, silver is poised to come along for the ride. Is this why so many investment houses and research firms were suddenly so bullish as 2020 drew to a close? If You Can't Beat 'Em, Join 'Em 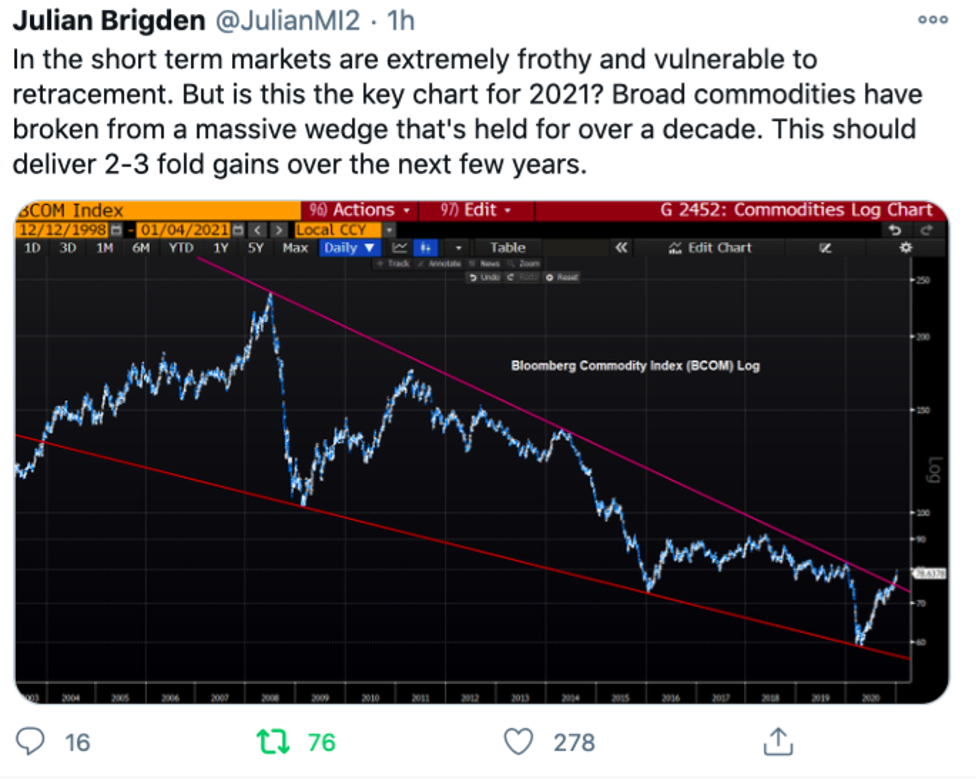 As with most bull markets in the precious metals, you should expect silver's 2021 gains to exceed, and even double, gold's. So I guess we should next consider just how far gold prices might rally in the year ahead.

Please scroll back up and take another look at the chart above from Ronni Stoeferle and be sure to note the period 2005-2011, the most recent extended bull market run for gold. Notice that, even if you include the crazy year of 2008, the average annual gain for gold was 20.4%.

So, with the conditions that have driven this bull market persisting through 2021, we should expect another new all-time high in gold prices later this year. A simple 10% extension above the current high targets a price near $2300. Hmmm, that sounds about right.

Perhaps price overshoots our year-end target as it did in both 2019 and 2020? That's certainly possible. Maybe we'll see $2400-2500 before the inevitable pullback and consolidation? It wouldn't surprise me, nor should it surprise you if it comes to pass. For now, though, let's just go with the year-end target of $2300 and another annual gain of around 20%.

Where gold prices are in uncharted territory, silver prices remain in "charted" territory, and as such, a review of the price charts can still be a helpful tool in assessing where we're headed in the months to come.

We had a goal last year of $22, and this target was deliberately set at that level due to the extreme Bank and chart resistance we expected to encounter there. However, price smashed through $22 last July and continued all the way to $30 before pulling back and twice tapping $22 as SUPPORT in Q4. Getting back above the equally-important $26 level before year end was also significant, and as mentioned, COMEX silver finished the year at $26.52 for a gain of 48%. Given all of this and after taking a look at the long-term charts, what should be our goal for 2021?

First and foremost, once COMEX silver exceeds its 2020 highs and begins trading in the 30s for the first time in eight years, it should rapidly move toward $35. If that's as far as it gets, the gain for 2020 would be about 32%. But that seems a little light since I expect something north of 20% for COMEX gold. Additionally, last year saw quite an overshoot of our goals during the late summer.

Perhaps, instead, COMEX silver shoots all the way to $38 or so in the first half of the year? If that happens, it's not out of the question that price could move toward $44 as an intra-year high.

So considering all of this—and considering the history of the past two years, as well as the likely late year consolidation and factoring in the ever-present Commercial short position that drives corrections and consolidations—I think we can settle on a year-end price goal of $38. That would mark another annual gain of 43%, and it would certainly be in line with what we expect in COMEX gold.

So that's it. That's what I think we should expect in 2021. However, as we close, let's re-visit the title of this year's macrocast—2021: A Gold Odyssey. Why did I choose that title?

Because the year ahead is going to be wildly volatile, perplexing, concerning, and fun. The gains that I expect us to post by December will not come easily, and as in any bull market, "riding the bull" all the way to the bell is going to be quite the challenge. It will kick and buck and do everything possible to throw you off and keep you from realizing the gains that you'll see if you complete the ride.

So this year's macrocast concludes with a warning and some advice: be patient. Do not allow yourself to get aggressively caught up in the day-to-day and tick-for-tick. Instead, maintain your focus upon the long term and The Big Picture. For the past decade, we've warned you to "prepare for the end of The Great Keynesian Experiment", and the events of 2020 have only served to accelerate its demise. You must continue to plan for the monetary event/shake-up/reset that is most assuredly coming. It's only a matter of time. The math is the math.

I recently came across a saying that gun owners like to use regarding their collection: "I have more guns than I need, but not as many as I want". That should be a mantra for precious metal investors, too. I may have more gold than I need, but it's not nearly as much as I want.

With The Great Keynesian Experiment barreling toward its inevitable conclusion—and with even higher prices ahead—you'd be wise to continue to add physical precious metal to your stockpile in 2021.